Each month, Randomville profiles an artist that Third Man Records provides us. For March, we’re reviewing the new Wanda Jackson album The Party Ain’t Over.

Jack White has an old soul.  He first revived the career of Loretta Lynn, and now he has pushed Wanda Jackson, The Queen of Rock ‘n’ Roll, right into the 21st Century.

White contacted Ms. Jackson in 2009, shortly after the 50’s rockabilly singer from Oklahoma was inducted into the Rock ‘n’ Roll Hall of Fame.  He asked her if she would like a shot at recording a song with him, and they started talking.  The exchange of ideas and songs led to a meeting in the studio, and the result is an eleven-song album of covers, called The Party Ain’t  Over. Wanda knew about his work with Loretta, and agreed to let Jack run the show in the recording studio.  She was willing to try just about anything Jack threw at her, but was hesitant on a couple of songs, including Amy Winehouse’s “You Know That I’m No Good.”  But Wanda had faith in Jack.

He didn’t steer her wrong.  The Amy Winehouse cover is one of the best songs on the album because it fits so perfectly for her vintage voice, the archetype of a bygone generation.  The video of the song is simple.  A hand moves a needle onto a record player, and the 45 spins as Wanda’s voice crackles over the speaker.  One YouTube fan commented: “Wanda just pwned Amy Winehouse.”

The collection showcases Wanda’s versatility in covering multiple genres of music, including Calypso, blues, gospel, country, rockabilly, soul and even Bob Dylan.  This may at first seem like a disjointed mix, but it works because White was able to capture Wanda’s  growling twang and infuse new life into the songs with Jack’s bad-ass guitar skills and his fabulous Third Man Band, including Jack Lawrence and Patrick Keeler of The Raconteurs.

Although Wanda’s high, grrrowling voice will not appeal to everyone, she does justice to most of the songs in the collection.  Bob Dylan’s “Thunder On The Mountain” is brilliant, although I must admit I am a big fan of Mr. Dylan.  Wanda matches Bob’s vocal qualities so closely (is there a duet in their future?).  White adds his own touches with a screeching guitar solo, and the outstanding horns and piano turn it into a party.  The song’s video shows tiny Wanda in her trademark fringes surrounded by the band and rocking out.  The playful interaction between Wanda and Jack is really touching.  It seems apparent they developed an affectionate friendship while making this album.

The other eight songs covered are from the mid-20th century.  These are songs you’d want to hear at a sock hop back in the day.   The only difference is the addition of Jack’s guitar antics and a few special effects that bring them back to the future.  Horns  and piano are omnipresent during “Shakin’ All Over” and “Rip It Up.”   She has a lot of fun on these two, and so does the rest of the band.  “Teach Me Tonight” is a romantic, slow-dance song with guitar licks to amp it up.  Wanda also covers her old boyfriend (yep, that’s true!) Elvis Presley’s song, “Like A Baby.”  This is a grinding blues song that only needs a feather boa to be complete.  “Nervous Breakdown,” got on my nerves a bit.  Although it fit in with the other mid-century songs, her growl got a little gravelly.  The gospel song, “Dust on the Bible” was pretty funky and more upbeat than the solemn words seemed to convey, but the harmonies with Karen Elson and Ashley Monroe added a spiritual vibe.

The last song of the collection brings us back to the simple start of Wanda’s long career.  It was the first song she learned on guitar and hails from the Depression Era: Jimmie Rodgers’ “Blue Yodel #6.”  Wanda and an acoustic guitar, just as it should be.

Ms. Jackson will now have a new generation of fans, thanks to Jack and his Third Man Band.  The playful and diverse collection of songs does justice to not only Wanda’s unique voice, but also to Jack’s ability to produce her and assemble a talented band of musicians to back her up.  I hope the party never stops. 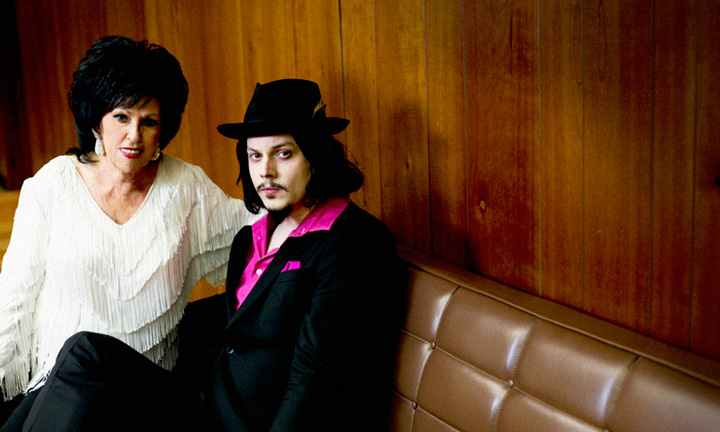