To Have and To Hold: Randomville Interviews Post Honeymoon

Note: The review of Post Honeymoon’s debut follows the interview.Â

When I caught up with husband and wife duo Post Honeymoon via phone in their Chicago home, one was in the midst of doing something very rock and roll: having cinnamon toast for a late breakfast.

Of the origin of this band, drummer/bassist Nick Kraska said in between bites: â€œWeâ€™d always wanted to do something together. It was something weâ€™d talked about doing for a while but it finally became a now or never thing.â€

He and singer/keyboardist Rachel Shindelman had been in two bands together previously: Bang Bang and New Black but Post-Honeymoon is their first band as a married couple.

If anything, the insistency to create is what makes Post Honeymoonâ€™s version of stripped down modern goth rock so irresistible. Consider the Hurricane Katrina-inspired opener â€œDirge.â€ Or the creepy, plodding piano melody of the instrumental â€œInterlude.â€ The two create songs that demand to be listened to. 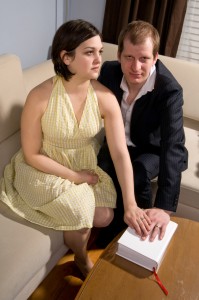 On a more practical level, the fact they are a duo helps keep the sound intact without having to defer to outsiders. â€œBeing in other bands there is always a diplomacy thingâ€ Kraska said. â€œWith just the two of us, thereâ€™s no diplomacy needed. You can call each other out more, too.â€ It’s probably easier to check your egos at the door when your band mate is your significant other and lives with you.

Post Honeymoon are adept at letting silence fill the void as much as noise. They play with dynamics in unusual ways. There is no guitar. Theyâ€™re heavily influenced by the post-punk of bands like The Birthday Party (clearly), Shellac (not noticeable) and early PJ Harvey (my opinion). The influences are there, yes, but theyâ€™ve been digested and what comes forth is something new and very throat grabbing. Iâ€™m willing to bet they give a pretty kick-ass live show, too.

And while Post Honeymoonâ€™s name is tongue-in-cheek on one level, itâ€™s also a reference to their frustrations and ultimate growth that came from their previous musical experiences and in dealing with the industry in general. The lyrics from the chunky, bass-driven â€œFirst-World Problemsâ€ are a perfect example of this. 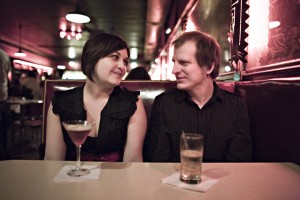 Shindelman said itâ€™s a song about â€œBecoming older, finding your place in the music industry.â€ But Kraska is quick to point out â€œItâ€™s also a â€˜Weâ€™re masters of our own destiny,â€™ too.â€ Older and wiser perhaps, but by no means hanging it up. Not if the sound of their debut is any indication.

Theyâ€™re pretty realistic about just how much a fanâ€™s interaction with music has changed, too. Itâ€™s hard to think of an early 1980â€™s Nick Cave having to consider the implications of illegal downloads but such is life in 2009.Â To this end, Post Honeymoon has an astute understanding of how to build a fan base. For every Chicago promoter who gets the word out to help build a local following, they maintain an active presence on the usual social networking suspects. Like Colin Meloy and Sonic Youth, they have a twitter account. And with a sixty date tour around the country starting in June, the more friends you have online, the more potential theyâ€™ll hopefully come to the shows, and get the word out to others.

Post Honeymoonâ€™s debut comes out June 9th. Find out their tour dates and sample their music (legally, thank you) on their myspace page. You can also follow their twitter andfacebook pages. If you are one of those people who download music illegally, they kindly ask you to come to the show and buy a t-shirt to make up for it.

Vignette about Rachel Shindelman, or The Birth of A Rock And Roll Star:

True story. Rachel Shindelman and I were in high school marching band together in Pittsburgh. We used to call her Lilith because she looked like Bebe Neuwirth’s character on TV’s Cheers and Frasier. One year we went to a marching band competition in Nashville. Rachel managed to get walking pneumonia and spent the rest of the year constantly coughing. I’m not even sure how I remember this but I am certain she signed my yearbook something along the lines of: Â “Cough. Cough. Have a great summer. Cough. Cough.”Â This interview was the first time I’d spoken to her in at least fourteen years,Â  and I’m happy to report she didn’t cough once. 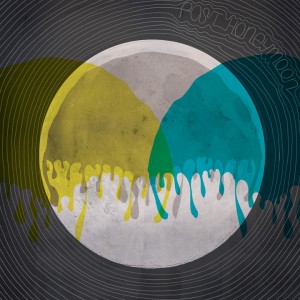 There is lowercased goth. The spiky hair, white make-up, songs about death clichÃ© that became comic fodder for Saturday Night Liveâ€™sChris Kattan. And then thereâ€™s Goth with a capital G. The post-punk, keyboard heavy, moody atmospheres that address other issues besides priestesses and dark lords and is in fact alive and well and living in Chicago.

The husband and wife duo Post Honeymoonâ€™s self-titled debut falls thankfully into the second category, if even that. Conjuring up post-punk influences ranging from The Birthday Party and Love and Rockets to PJ Harvey, the band throw in lyrics that are as dense as the music is sparse, proving you donâ€™t need a lot of bodies to make an impact.

Keyboardist Rachel Shindelmanâ€™s voice is a treat. She theatrically paints a real-life portrait of Hurricane Katrina on the albums opener â€œDirgeâ€ and then becomes eerie on the Sisters Of Mercy-meets-Holly Golightly â€œLittle Messes.â€ This song in particular has quiet a Flowers In The Attic vibe to it. Drummer/Bassist Nick Kraska is no less spell-binding, knowing when to create a powerful rhythm, and when to let silence speak loudly.

Additional standout tracks are the driving â€œNight Guardâ€ with its shouts of â€œGet Down,â€ the giant fuck you that is â€œFirst World Problems,â€ and the narcotic piano â€œInterlude,â€ which further defines the bandâ€™s sound with no words needed.

At nine songs and just over thirty-five minutes itâ€™s a bit light. But with the quality so high, quantity is a non-issue.