Unsigned Myspace bands are either a potential gold mine of amazingness, or a good reason why the adage “Don’t quit your day job” still holds true. Having said that, there are more than a few decent ones. Here are two of them. 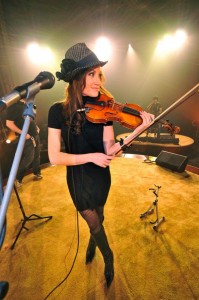 Country Â has never been my go-to music, because as a genre it tends to be rigid in its conformity. Just like regular pop music, there are certain formulas and sounds to follow if one wants to be accepted. So I guess it’s a bit odd, talking up anyone from this genre by someone whose favorite country albums are Ween’s “Twelve Golden Country Greats” Â pretty much anything by Cracker and old Â lo-fi recordings of Hank Williams. But this is Randomville after all. We’re eclectic.

While trolling the myspace for the unsigned, I came across singer/violinist/guitarist Jessica Rae. Â She’s based in Nashville (where else) but comes from Chicago. She’s got three songs on her site. The middle-finger-flip to a dude called Â “That’s That with That” Â easily would have been a video in heavy rotation during The Nashville Network’s heady days. Â Rae’s got the snark down, too. “Dancin’ With The Devil” is a more mid-tempo cautionary tale of love gone sour. To me though, “Lost Again” sounds like it could and should become the “crossover” hit. And while I hate that term because genres should be fluid anyway, I also don’t care because this is the song that lets the country production sheen down a tad, so Rae’s voice really shines.Â Â The chorus: “When I’m with you, I lose myself, when I’m without you I find myself, wanting to be lost again” is elegant in its simplicity and leads into some nice guitar work.Â This song, along with her ear for melody, is worth the price of admission. Or will be, hopefully. 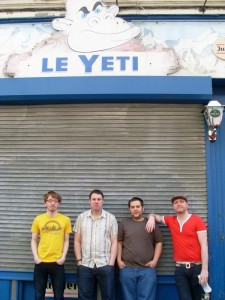 Once it went like this. You started a band. You built up a local following. You released an album. Maybe two. But you never grew outside your region (or you did but in obscure ways, like you somehow made the top ten charts in Croatia) and your albums ended up languishing for a half a decade in the dust bins of back record stores for years and years, just waiting to be found by that music freak in Pittsburgh or Austin or wherever who. See Scruffy The Cat, The Young Fresh Fellows, The Frampton Brothers, and Big Dipper for examples. Â But now in the Myspace age the question begs, is it possible to be discovered sooner? The internet is a large entity, sure, but it’s a heck of a lot easier to google “Unsigned Myspace Bands” than it is to even try and find a record store. And to think, your musical legacy, even if its just a blip in time, can be housed on a website.

Take for instance this unsigned band for consideration. The Livepool-based fightfightfight. They sounded post punk, jittery and fun. They sound indebted to the early 80s. In other words, they sound like a lot of other bands coming out of the UK at the moment. Compare them to Hot Club De Paris, and Pete and The Pirates, for example. But far from being derivative, songs like “Pentivelli is Next,” with its angular guitar, the pogo-worthy “Tha’ ain’t dancin” Â and the yelpy keyboard punctuated “Uh Oh A River” makes me think they should have shared some opening slots with the other bands. By far “Pentivelli is Next” is my favorite song.

And Who knows? They only just broke up in January. Maybe we can rally them to get their shit together and keep going.