This is one of the many films we will be reviewing as part of The Seattle International Film Festival.

In theÂ documentary We Live In Public, director Ondi Timoner (Dig!) captures the life of Internet mogul Josh Harris for nearly a decade, following him through his wild experiments, fortune rises, and fortune plunges.

The prelude explained how Harris became famous (and filthy rich) in the 80s with Jupiter Communications, and the dot-commer was ahead of his time back then by predicting the uses of social networking that we use today (Myspace, Facebook, Twitter, etc).

Suddenly the geeky kid whose best friend in childhood was his television, was on top of the world in New York City and hosting some of the most outlandish parties that people could imagine. Dubbed “The Warhol of Web TV” with his new technology of hosting TV shows on the Internet with his new company Pseudo, Harris decided to do a Big Brother-ishÂ experiment in 1999 to see how people might react if they were under surveillance at all times. And this is where the film really began to focus on the antics of Harris.

Harris created an underground world where participants agreed to live for free (food, booze, firing range, etc.) in this corridor that Harris had built for one month and to socialize with the other creative people. The only catch was that cameras were EVERYWHERE and rolling at all times.Â TheyÂ could even switch the TV channel in their bed to the person in the bed next to them. Oh, and no one was allowed to leave the building. Parties, sex, drugs; it was all on tape.

As expected, people liked the edgy idea at first, until the almost militant Â lifestyle began to catch up with people and interrogation rooms were also set up to see how far the sanity of humans could be pushed. Eventually the N.Y. Police found reasons to end thisÂ cult-ish experimentÂ and Harris’ (expensive) puppeteer project was destroyed. 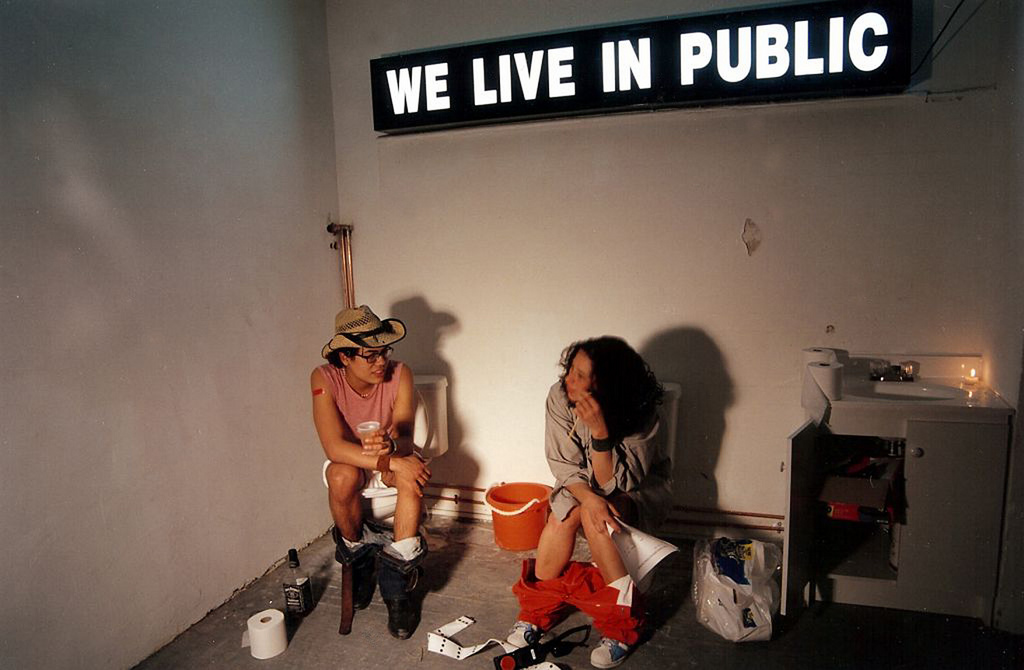 Harris then decided to step it up a notch and convince his girlfriend at the time to allow them to be under surveillance at all times…for good. Cameras and highly sensitive mics were set up in the bedroom, bathroom (even the toilet), kitchen and you name it. There was NO privacy. At all. Especially because viewers watched all of this online 24/7 while simultaneously chatting and becoming “friends” of the couple. They figured if they could survive that, then they could survive anything.

But the dot com boom became a bust in 2000, and along with Harris’ fortune, his life began to crumble. Eventually his non-private relationship crumbled because ofÂ theÂ constant cameras rollingÂ and the viewership of his project went from thousands daily to about fifteen.

The film follows him closely through all of these wild and fascinating experiences, and it watches him run away from problems as well, which seems to be a theme his whole life. Perhaps Harris is correct that no one will have any privacy in the future and it appears he was right that we are already relying on social networking perhaps too much already.

Creative minds like Josh Harris’ don’t go away easy (even though he was lastÂ seen hidingÂ from creditors in Ethiopia) and we’ll certainly hear from him again in the future.

After the film, directorÂ Ondi Timoner took to the stage, but with a suprise: Josh Harris was actually in the house (I had heard it through the grapevine that Harris showed up as a surprise on May 23rd also, so I kind of expected him). One of the first things that Timoner mentioned was that the film was released at a perfect time when sites like Facebook and Twitter are just blowing up.

Harris made a point that these social networking sites that feed attention starvation can actually hurt relationships because of the balance of time between them. And he should know, since he had a relationship crumble this way. Asked what he planned to do next, Harris only briefly mentioned that he was working on a “George Orwell chicken-coop experiment and wants to build a wired city.” At first IÂ thought he was joking, but I’m not so sure he was. 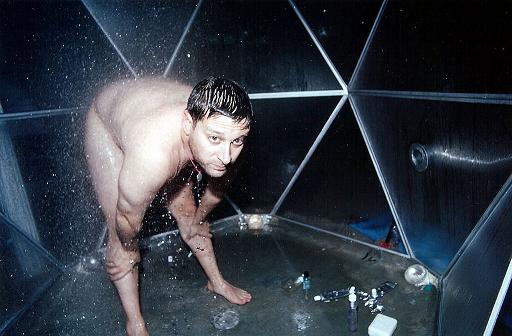 Nothing is sacred. Josh Harris being filmed in one of his showers

The crowd also asked him about his bunker-experiment where the participants were under surveillance and how it meshed with Warhol’s 60s energy. Harris replied that Warhol advertised the whole idea years ago, but Harris just took it a step further. Shockingly, a viewer asked Harris if he was able to relate to Hitler (and two other leaders’ names I didn’t catch) because of how he ran the camp. This obviously caught Harris off guard and he pretty much ducked the question and had no answer.

Harris also said that he has yet to see We All Live In Public and that he would watch it in private with Timoner. Timoner then revealed that after Harris kind of went crazy from his experiments, she allowed him to go to her place and view the footage for the film. Harris didn’t like how he looked and stole all of the years of footage, much to the dismay of Timoner. Years later, he contacted her and asked her if she wanted to finish the project and she declined. But eventually he talked her back into finishing this movie, and even gave her creative control.

My personal opinion is that Harris might be the most attention-starved person of us all as this documentary explains how he’s “up” when people are looking at him, and very “down” when they don’t. So I think that is partially what fuels his fires for taking risks. Ondi Timoner did a wonderful job in capturing a decade of a mad man on film and sharing all of his antics.

When I left the theatre, I discovered that I had left my cell phone at home. So I quietly walked to my car alone, feeling the warm sun lay down on me during a gorgeous afternoon. No internet, no technology, no tweets. Life was calm, meaningful, pureÂ and real during that walk. Just like the old days and I was glad I could experience it. When I got home, I was on the computer within five minutes…which was a choice I made.