When You’re Strange: A Film About The Doors

Ray Manzarek has famously berated Oliver Stones’ 1991 film The Doors for years citing that too many parts of the film were inaccurate and untrue, even calling it “insidious” at one point. So now director Tom DiCillo has been called upon to tell the real story and make a real Doors documentary. Oh, and he got Johnny Depp to narrate the film too.

When You’re Strange starts out in a unique way by showing the bearded Jim Morrison during desert footage that he shot in 1969. The loop is that when he is in a car, he hears about his own death (which of course was added in later). The emotions and actions he takes during this desert trip (“Killer on the road…”) follow in sync with the happenings and mood of the band during their timeline and clips of this bearded Jim show up sporadically all through the film. Indeed, the changes in culture in the late 60s seemed to influence the band; or maybe the band influenced the culture at times. Either way, you’ll see reasons for these thoughts in When You’re Strange.

The early years of how this band formed gets sped through rather quickly, however that is supplemented with some truly vintage concert footage that’s been sitting on some shelves for over 40 years. Personally, I’m a huge Doors fan and I thought I had seen just about all of their live footage, but this film provides many treats of rare footage for any Doors junkie and especially just the casual fan. Plus, the name of the mystery bass player on the album L.A. Woman finally gets revealed: Jerry Scheff…Elvis’ old bass player.

Robby Krieger, Ray Manzarek and John Densmore really were gifted musicians and they certainly get their due, but we all know that the main focus of The Doors was Jim Morrison and much like Stone’s film The Doors,  When You’re Strange also centers around him and what he did. From his hard, acid-tripping nights in The Whiskey a Go-Go to his severly drunken concerts or recording sessions, the story of Jim’s wild antics are displayed in full bloom.

One difference between this film and The Doors is that Stone’s version focused on many story lines between Jim and longtime girlfriend Pamela Courson, and also Jim’s only real wife, Patricia Kennealy. In fact, Kennealy is never even mentioned in this new documentary. So props to DiCillo for sticking with the real subject here: The Doors. However, there are no current interviews with the remaining members and it would have been nice to hear some of their stories about what happened, and well, just rock star stories. Although sparing the audience from Manzarek repeating the word Dionysian once more for the millionth time might be a blessing also.

As it was stated before, this film is still basically centered around Morrison and the guy really was a true, rock sex symbol back in the day. He was like Elvis, but dirtier. Watching old footage of him getting the audiences so wound up that he could start riots is really fascinating. Think about it: When was the last time you heard of a modern day rock star starting a riot or getting arrested on stage? Jim did it all and it’s all in this film. 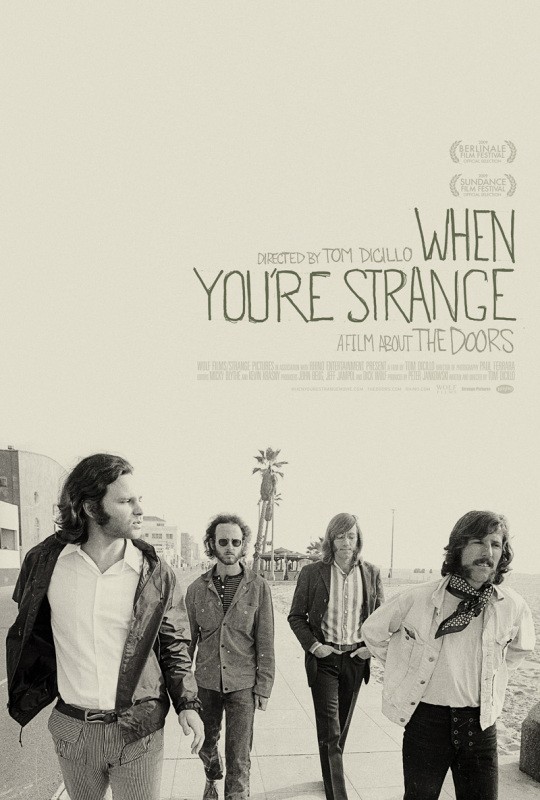 When You’re Strange will share some exclusive images of some of Jim’s final days in Paris, but I found it interesting that they failed to mention that he died of a heroin overdose in July of 1971. While there has been much speculation about how he died over the years (and that he’s still alive…with Tupac, Biggie and Elvis!) few people are aware of the heroin involvement and it’s usually just stated that he died in a bathtub. This film revealed so many little tidbits and new information that I’m surprised this never made the cut.

Regardless, Tom DiCillo did a great job in showing the cinema world just who The Doors really were and I’m sure he was under close scrutiny by Manzarek and co. Of course there had to be things left out of the film because there is only so much room and really, that’s what books are for. Overall I felt like they did a better job in this version than Oliver Stone’s in not making it a complete Jim Morrison bio, and the live footage and rare scenes are like no other. Really my only complaint is that it could have been a little more personal with some interviews from band members. And whether The Doors and Tom DiCillo like it or not, this version mirrors the Oliver Stone version more than they might like to admit.

But it was good enough that I’ll probably go back to see it again, because this is a great film about my favorite band of all time.