Why I can’t stand The Pittsburgh Steelers

The Pittsburgh Steelers were upset by Tim Tebow and The Denver Broncos this past weekend and I loved it. I did like Tebow in college but only by default because I’m a Florida Gators fan. I am not a fan of the Broncos. But I loathe the Steelers, so this result made me smile. 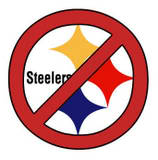 In truth, having so much emotion into players on a sports team does make me feel a little simple. I’m well aware that there are more important things in life and I do feel like I spend time focusing on those also. But pro football is something I really enjoy and it’s a place for me to escape the rest of the world for three hours at a time.

I have nothing against the Steelers’ players themselves. Well, let me take that back. I hate looking at Ben Roethlisberger for the same *rape!* reasons as everyone else. Everytime I see that backwards ball cap of his I’d like to smack him so hard it flies off. He just looks like a smart ass punk with that hat.

And I do think that James Harrison is a dirty player. But with that said, I still admire the toughness of Roethlisberger even if I think he’s an overrated quarterback. And I think Troy Polamalu might be among the best safeties of all time. You can’t deny the winning tradition in the Steelers’ organization and I have much respect for that and their superb coaching.

The reason I can’t stand the Steelers is because of their fans. Within minutes after being humiliated on national television by Tebow and all of his religiousness, the posts I started seeing from Steelers’ fans on Facebook were along the lines of “We still have our six rings!” or “We’ll just go polish all of these rings in the off-season,” blah, blah, blah. Not once did I see a single Steeler fan admit and say the words, “You know, we sucked today!”

They don’t have the ability to admit it. That goes against their rules of arrogance. It seems like anytime the Steelers lose, the reasons have to do with weather, or a key injury. They even might try to claim bad officiating but miraculously, it still seems like officials favor the Steelers even after the drama of their Superbowl game with the Seahawks several years ago.

Look, I’ve been a Detroit Lions fan over half my life. For years it seemed like every week I was saying “we sucked today!” I was just being honest. Especially the year we went 0-16. THAT sucked! But again, had that happened to the Steelers, you wouldn’t have heard that line. Instead they would have made up some other excuse. Or changed the subject by talking about other accomplishments.

Whereas I would use honesty, Steelers fans tend to be cocky. And I can’t stand arrogant people. Hence my dislike. I grew up around a lot of Steelers fans and it seemed like it was always excuses when they lost, and the second coming of Christ (sorry, had to throw that Tebow jab in there!) when they did win. There is nothing worse than being around a Steelers fan for about five straight days after they had a big win. “So guys, what time is that report…” STEELERS! “Um, yeah. If we could get that done, that would be great.” NOT AS GREAT AS THAT WIN THE STEELERS HAD ON SUNDAY! “Can we talk more at six tonight?” SIX RINGS! STEELERS!! BIG BEN!!!!

I always think of that big oaf QB strutting down the sidewalk when I hear this song:

To me, they remind me of those cocky jocks from high school that still have a need to be a cocky jock from high school. Think Rick Derris from the movie Clerks. The cocky guy with the nice car who was buying milk.

I’m not saying that ALL Steelers fans are like that, but in my experience so far, I will say the majority. I’ll give that team props again in saying that their fans are loyal as they will travel all over the country to support their team.

There will always be a few people who ruin a good thing, like the testosterone-fueled idiots who burn down their city either after a big win or loss for absolutely no reason. Or Shemp from The Three Stooges. But in this case, I still say it’s the majority of their fans that are annoying.

Having pride is one thing. Being an annoying, arrogant, asshole that nobody wants to be around is another. The typical Steelers fan reminds me of those crazy parents at high school sporting events that race up and down the aisles screaming in a rage over results in support of their kids. The other fans just sit there and roll their eyes, feeling bad that the kid has to be linked to that insane parent.

I’m not biased just because I live in Seattle either. For those who don’t live here, in Superbowl XL the Steelers clearly got officiating calls in their favor that some think cost the Seahawks that game. My honest opinion is that it could have shifted the tempo of the game, but Pittsburgh would have won anyhow. To those Seahawks fans that are still mad over that game nearly six years ago now, go talk to a Native American if you feel like you got screwed. And go to a therapist also. It’s been six years!

No, I’m not really mad at the players, coaches, owners, or even bad referees. It’s you, the typical Steelers fan that makes me despise that team. Well, and Roethlisberger. This is why I will continue to shake my head in disappointment anytime you win, and pump my fist when you lose.

As I wrote this article, I began to think that their style of being a fan is contagious as I’m talking about bragging when Pittsburgh loses and laying it on thick.

But the difference is that I won’t be mouthy and annoying about the results for the team that I like. I will admit that The Lions’ defense sucked against The Saints and we deserved to lose last Saturday. However we also dusted Tebow and The Broncos this year. Just saying.

You do still have some decent fans left, Pittsburgh. But similar to printed newspapers, they are fading fast. Just don’t breathe in too many ring polishing fumes this extended off-season. Like arrogance, too much of that stuff can be bad for you.