UPDATE: CONGRATS TO OUR WINNER, JESPER THUSGAARD OF DENMARK!!!

Anyone interested in winning a free copy of Ben Kweller’s new album Go Fly A Kite and also win a signed poster by Ben himself? OF COURSE YOU DO!!

Here’s what you have to do: Either leave a comment to this story that says the words “Ben Win” or send an email to contests@randomville.com with the words “Ben Win” in the subject line. You have until 11:59pm on Sunday, February 12th, 2012 to enter. You can only enter once!

While you are waiting, enjoy a free download of his song “Mean to Me.” 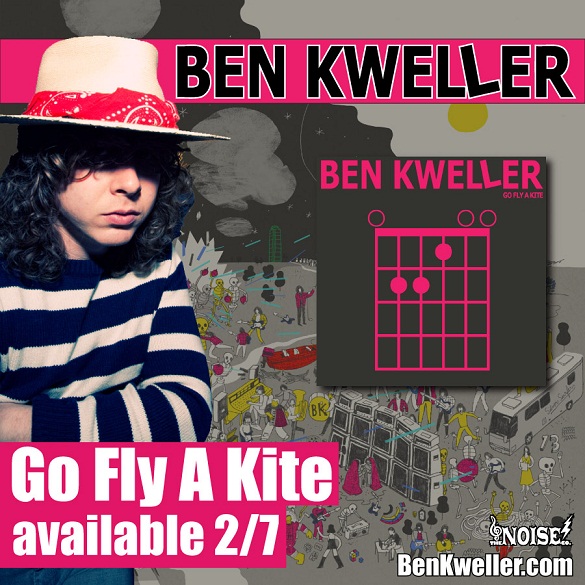 Children are often raised in musical families, but few receive the same introduction to music as singer/songwriter Ben Kweller. Before he was old enough to enter kindergarten, a young Kweller emulated Nils Lofgren (who, during his time with Bruce Springsteen’s E Street Band, would hang out with Kweller’s father) by playing his toy version of the guitar. He also played piano, and by the age of eight, Kweller had begun penning his own songs. The following year, he received a nod of encouragement from Billboard magazine when it conferred an honorable mention on the youth for his entry into Billboard’s yearly songwriting competition. By the time he hit his teenage years, Kweller was an accomplished guitarist and had begun playing drums as well. He pulled together his first band, Mirage, and followed up with groups like Green Eggs & Ham and Foxglove. All the while, he honed the skills that would later launch his respected solo career.

With help from bassist Bryan Blur and drummer John Kent, Kweller established Radish in 1993. The group made its mark on the local Dallas scene, not far from Kweller’s hometown of Greenville, TX. In 1994, the musical wunderkind and his teenaged outfit released the Hello EP through Practice Amp Records. That same year, the label released the full-length album Dizzy, which convinced producer Roger Greenawalt to partner with the group. Under his wing, Radish produced another demo and inked a contract with Mercury Records during the summer of 1996. Ben Kweller was still a teenager at the time, having turned 15 years old that June.

Mercury Records released Restraining Bolt the following spring, and led Radish through European and American tours (as well as several late-night TV appearances, including The Conan O’Brian Show and Late Night with David Letterman). Despite scoring a Top 40 hit in the U.K. with “Little Pink Stars,” Radish failed to enjoy significant success at home, and changing tides at their label (Polygram, Mercury’s parent company, was absorbed into Universal Music Group in 1998) prevented them from releasing another album. When the group disbanded in 1999, Kweller headed east to Guilford, CT, where he stayed only a short time before relocating to Brooklyn, NY. Not yet 20 years old, he signed with Island Records as a solo artist.

Ben Kweller launched his solo career with a series of EPs, some of which reprised the material that Radish had written but not released. His heartland hooks and folksy flourishes made fans out of several artists, and Kweller soon found himself touring with the likes of Juliana Hatfield, Guster, Kristin Hersh, and Evan Dando. He inked a deal with ATO Records in 2001 and released one final EP before issuing Sha Sha, his solo full-length debut, in 2002. More touring followed, as did a collaboration with Ben Folds and Ben Lee known asthe Bens. Kweller’s sophomore effort, the subdued On My Way, followed in spring 2004 and was supported by a co-headlining tour with Death Cab for Cutie. Two years later, he returned with his self-titled third album, on which he played all the instruments. Kweller furthered his experimentation with 2009’s Changing Horses, which saw the songwriter embracing country music and employing a pedal steel guitarist.