An Interview With The Soundtrack Of Our Lives

Gaining insight from musicians is always a special treat. But with an international act it is even more so due to the differences and comparisons we can make with those from distant lands. Such an experience is one I shared when interviewing Swedish rockers The Soundtrack of Our Lives.

NOTE: All photos courtesy of the SOOL MySpace page

The band has been together since 1995, has released five albums, and even toured with Oasis in 2002. The band are currently on tour here in the states to support their latest album Communion. We sat down with guitarists Mattias Bärjed and Ian Person while visiting New York City to discuss their career, live shows, and simply what makes The Soundtrack Of Our Lives different than most acts.

Randomville: So how does it feel to be here in NYC with the unpredictable weather? Is this something you guys are used to?

Mattias Bärjed: Yeah, sort of. In Sweden the winter has been very stable this year. But for the last couple of years, none of the four seasons have been trustable. I think people all around the world are getting more and more used to an unpredictable climate and weather. Personally I’m worried about the environment and the direction we’re going towards. But what the fuck…We’re playing indoors in New York so in that sense it’s not a big issue!

Ian Person: Feels just like home, Harbour City, with a lot of rain fog and grey clouds that rolls in with no mercy!

Randomville: Can you describe your first instrument and how you’re preference to instruments came about?

Mattias Bärjed: My first proper instrument was a snare drum. I got it for Christmas when I was eight. Before that, I just fooled around on toy guitars and on my siblings’ and father’s piano and guitars. I quit playing the drums after a few classes because I realized one of my friends was way better than me. I wanted to be Randy Bachman when I was four or five years old, but at that time I couldn’t play at all. In the fifth grade I got hooked on Yngwie Malmsteen and from then on it was only guitar, guitar and more guitars.

Ian Person: An acoustic guitar. I used to sit around and listen to my sister’s George Harrison records and wanted to be able to make those beautiful sounds.

Randomville: What imagery would you say your music conveys?

Mattias Bärjed: The music speaks for itself. An important thing with making music is that you allow people to make their own personal images, interpretations, feelings etc. out of it. There has to be a certain amount of mysticism in music, otherwise it’s not interesting. I think it’s a very wide spectrum of bizarre images that an audience gets to see if they go to a show by our band. The image of the Grand, Rasputin, John the Baptist or the bear looking front-man of Ebbot making strange faces is probably the picture that comes to mind for a lot of people who know us from before. 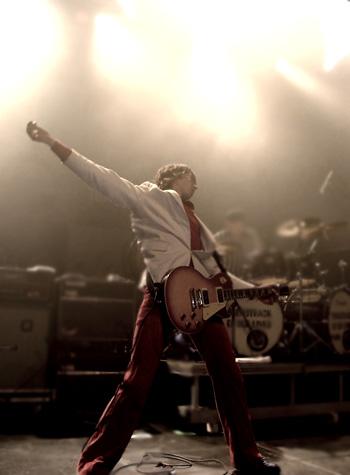 Randomville: Do you attend sessions? And what would you say makes a good session?

Ian Person: Yes. A good session is about listening to what the musicians are doing and trying to form an organic worm that takes over the studio.

Mattias Bärjed: Sessions are all about great vibes, great players, and great songs.

Randomville: With so many members in your band how do you feel the dynamic of song writing/performing live changes?

Mattias Bärjed: When we play live the music is way looser than on our albums. It’s a lot of jamming going on and we do extended versions of the songs. If you are doing mistakes in this band you know that there’s always somebody there to cover it up for you. I love the chaos that our band creates in live situations!

Ian Person: Being in the studio opens you up for discussions, while live is a spur of the moment thing. We just go with the flow. Best advice is just to free your mind and your ass will follow…

Randomville: Did you all meet at once and decide “okay, we have to be in a band”?

Ian Person: We all had bands before, so we knew each other from the music scene in Gothenburg.

Mattias Bärjed: Ebbot (vocals) and Ian played in Union Carbide Prod, Fredrik (drums) with Whipped Cream, Kalle (bass) with Electric Eskimoes (all of these being other bands in Sweden). Martin (keyboards) and I played in Nymphet Noodlers. Björn Olsson played guitar in the band up until 1997 then I joined the band in March 19997. I think Ebbot and Björn wanted to recruit the “best boys” from other bands in Gothenburg at the time and they found us. 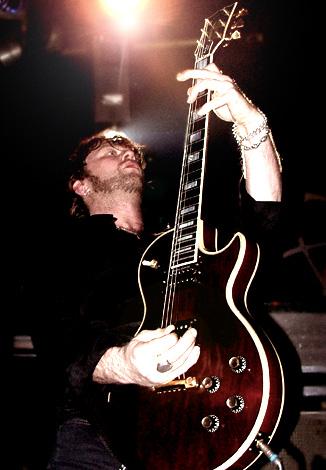 Randomville: Do you perform in public apart from your typical concerts? Describe those occasions?

Ian Person: We’ve been touring around the world since 1996 with our band members which has allowed us to have done loads of radio shows and TV!

Mattias Bärjed: We’ve done shows on TV, toilets, radio, churches etc. We’ve toured all over the place, being both headline and support acts on tours. Among the bands we’ve played with are U2, The Black Crowes and Robert Plant!

In 2002 we toured with Oasis and that helped us in a big way getting across in America. We’ve also done Letterman, Leno, O’Brian, Jools Holland etc. The American TV shows are so much better produced than, for an example, a Swedish one. We’ve got things to learn here (Sweden) when it comes to great live TV-sound, picture production and satisfying catering!

Randomville: What advice would you give to beginners who are nervous?

Mattias Bärjed: I was super nervous for the first “shows” I did as a kid playing classical guitar in front of kids, parents and teachers. I sweated, farted and shaked like a belly dancer’s lard. As you get experience it tends to get easier. I’m very seldom nervous anymore. But if I am, it’s not about performing. I love that. What can make me frustrated is if a broken amp is fucking up the show or if I get “out of tune” guitars from our roadies. My advice is simple “don’t you worry…..everything is going to be alright.”

Ian Person: Have a drink; it is what we Swedes do to loosen up.

Randomville: And lastly if you weren’t in a band what do you think you’d be doing?

Mattias Bärjed: I would go solo and make all the decisions. But, I really love the band formula and I’m glad to be in one.

Ian Person: I would be a chef.