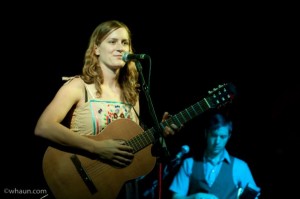 Pacific Northwest native and Singer/Songwriter Laura Gibson recently signed on to collaborate with Barsuk. As you’ll read in our interview, she was all over the place in 2011 touring her wheels off. Her sixth album release will be coming in 2012 with the release of La Grande in the works. And odds are, she will likely tour near you also.

Randomville: So let’s look back on 2011. How many tours did you do?

Laura Gibson: I did several short tours and one-off type shows in 2011, but not as many long extensive tours. I toured the Southwest and Western States with Sean Lennon’s project GOASTT. I toured the West Coast with Rocky Votolato, and the Northwest and Mid-West with the Portland Cello Project. I spent the month of April in Spain, but only played a couple of shows, mostly working on a collaborative recording. I spent September in the UK with Richmond Fontaine, a few scattered Europe shows in November, and one special New Year’s Eve show in Sitka, Alaska!

Rv: What city/venue did you play that surprised you the most? A place that the crowd was really into you and you didn’t expect it?

LG: I really didn’t know what to expect playing New Year’s Eve in small-town Alaska. I’ve never thought I would play a New Year’s Eve show, as my music isn’t exactly party music. But the audience was so dear and thoughtful, and seemed ok with ending the year on a quiet, more contemplative note. The venue was a beautiful community center with wood carvings from the tribes in the area. The show ended a little before midnight, so I rang in the new year afterwards at the local fishermans’ haunt down the street.

LG: Perhaps my most memorable moment this past year was performing at a benefit for Basic Rights Oregon, in a huge ballroom at the Portland Art Museum. There were over a thousand people in their fanciest suits and evening gowns. To my surprise, right before I went up on stage, the MC asked for all of the politicians to come up and stand behind me. So somehow I shared the stage with practically everyone I voted for in last the election from City Council to State Senators, The most intimidating people in the audience were actually standing right behind me as I was performing. It was very strange and awesome.

Rv: What were your eight favorite albums of 2011?

LG: Oh! Superlatives are so difficult for me! Here we go in no particular

Gillian Welch – The Harrow and the Harvest

Nick Jaina – The Beanstalks That Have Brought Us Here Are Gone

2011: A year of charity Why I can’t stand The Pittsburgh Steelers
Copyright 2009 - 2012
Randomville.com ™
All Rights Reserved - Photos Licensed by PR Photos