Better Than Nothing: A Review of the Jay Reatard documentary

Back when I lived in L.A. during the summer of 2009, I dragged my friend to drive out with me to Amoeba Music in Hollywood, to see a performance of one of my favorite musicians, Jay Reatard (born Jimmy Lee Lindsey, Jr.). It was quite a show; Jay and his band played a blitzkrieg-paced set, full of distorted guitars and harrowing snarls. During the brief interludes, Reatard would drink on stage and taunt the audience, particularly the “Pitchfork Media readers.” As the tensions between Reatard and the audience members rose, the band’s performance grew stronger, further radiating his trademark pissed-off swagger that was evident in his sprawling discography. For his grand finale, the drunken, shaggy-haired and snarly-faced lead singer pointed to a display of his latest (and sadly final) studio album, 2009’s Watch Me Fall, angrily shouted incoherent obscenities, then snatched a copy and repeatedly smashed it on his head. It took a couple of tries, as plastic vinyl is pretty hard to snap, but he managed to do it and the audience cheered.

That show (as well as Reatard’s antics) ended up converting my friend into a fan, and both of us eagerly bought copies of Watch Me Fall and stood in line to get Reatard’s signature. When we finally met him and got our records signed, we told him that we were awaiting the day that he would come back and kick our asses once again.

Sadly this would not be the case. Reatard passed away merely a few months later in January of 2010 due to a bad mixture of cocaine and alcohol. Some questions still remained after this unfortunate event. Who exactly was this Jay Reatard? Who was this scraggly looking guy who cranked out music month after month, forming and disbanding eight different bands before starting a solo career? A man who garnered a notorious reputation for his angry streak, and once ripped his band members as “boring rich kids who can’t play for ahit [sic] anyways” when they left his touring unit en masse? 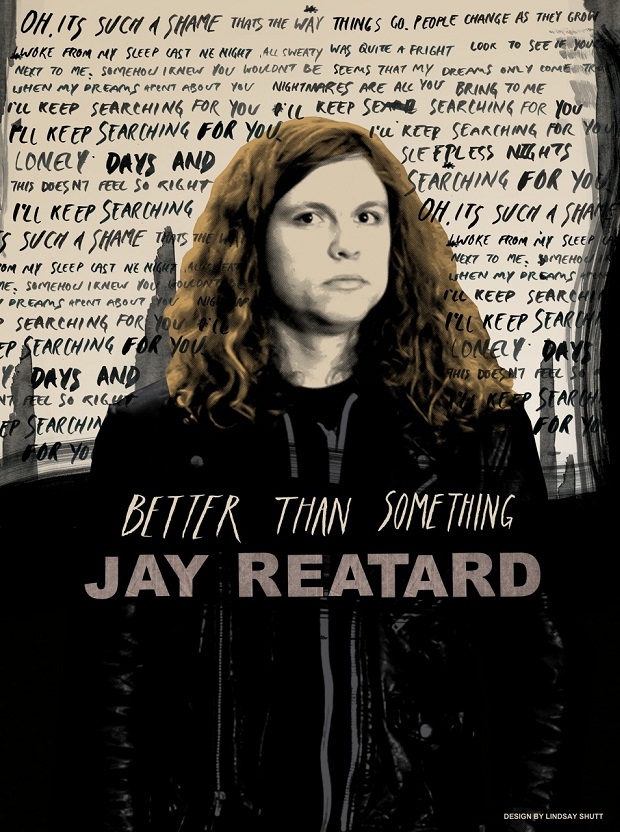 Better Than Something: Jay Reatard attempts to answer some of these questions, and also serves as a celebration of Jay Reatard’s prolific career. Compiled by filmmakers Alex Hammond and Ian Markiewicz, the documentary mainly comprises of interviews of Reatard (shot a few months before his death), his family, and many colleagues, along with rough live footage and television performances serving as interludes. Originally starting as a short called Waiting for Something, the documentary was given the feature-length treatment and began premiering in theatres in March of 2012 after numerous festival screenings.

Better Than Something is oddly edited. Whereas most biographical documentaries start by interviewing figures from the subject’s humble beginnings then gradually brings in people from later in the subject’s life, Better Than Something takes the opposite approach. The documentary starts by portraying Reatard at his peak, with his band members discussing his creativity and output. Then it gradually moves backwards with interviews from Reatard’s family occurring at the end. However, this does not really affect the impact of the documentary due to the fact that Reatard never really changes. Early on he states that during the ages of 14 through 16, he had little contact with the outside world, ditching school and maintaining few friendships. Instead, he simply stayed in his mother’s shack and just recorded, recorded, and recorded; a pattern that he continued until the day he died.

The documentary itself paints Reatard as one of the more productive musicians of recent memory. Indeed, from his debut release in 1998 to his unfortunate passing 12 years later, Reatard released almost 20 different studio albums, over 30 singles and splits, and a variety of compilations, extended plays, live albums, and compilation appearances. If you add all of those together it becomes almost uncountable, and if you take under the consideration the fact that he released this under eight different bands it becomes almost unfathomable.

Something heavily implies that Reatard’s creativity was not necessarily a product of his environment, but rather of his massive dedication. Reatard called his creative process a “race against time,” claiming that a musician only has a limited number of songs in them, and that is up to him or her to release as many as they can before the well runs dry. As Something interviews band member after band member, much of what Reatard states is confirmed; one of his former producers even states that he wrote a variety songs when he felt “the most inspired.”

Part of the fun of the documentary lies in watching Reatard adapt new techniques and tactics to his sound. During an interview with Alicja Trout, Reatard’s former bandmate from the Lost Sounds, Trout recalls that at one point, Reatard hated having synthesizers in his band, saying they don’t belong in punk music, but gradually came around to the idea. Before Trout states this, we see Jay rolling his eyes at her synthesizer. Afterwards however, it’s Reatard behind the keys, giving his all and playing it as if his life depended on it. One of Reatard’s producers even mentions that before his death Reatard had intended on releasing a full-on country album released under his own name.

While the film defines Jay Reatard: The Artist, one of the Better Than Something’s flaws is that little is seen of Jay Reatard: The Person. Most of the interviewees, including Reatard himself, simply discuss their professional relationships with one another, but little is mentioned of his personal, off-the-road and out-of-the-studio goings. Many of Reatard’s former girlfriends, along with one of the former band members that Reatard ripped in the above tirade are interviewed, and while many detail the messy ends that they had with him, all of them fail to mention why the falling-outs happened, and what exactly occurred that resulted in such friction. Little is also mentioned of the origins of Reatard’s famed angry streak, and how it was affected as he grew older.

But this was not the point of the movie. Jay Reatard was a man who dedicated his entire life to his music, putting his heart, soul, body and time into his countless releases and touring, that quite frankly it would be difficult to catch such a busy man on his downtime. Better Than Something: Jay Reatard was meant to celebrate the life and career of one of the most creative and hardest working musicians of the century, and leaves the audience to figure out the questions of Jay Reatard: The Person on their own. And if you haven’t figured out how to do that yet, then you don’t deserve to.