Charity of the Month: December 2011

Each month we feature a new charity to share with our readers in hopes that they might donate to or at least spread the word to others for awareness. For December, following World AIDS Day, we are profiling Health Education Africa Resource Team. 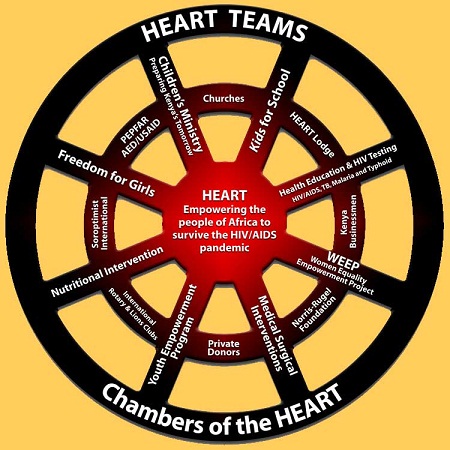 Not long ago, Jane Akini’s family was buying her coffin. They were moving her children in with relatives and sending her upcountry to die when one grandmother and pastor’s wife intervened. That grandmother, Vickie Winkler, moved to Kenya and rode the matatus around Nairobi to build an organization that empowers women. “I noticed that it was a lack of knowledge destroying the people of this nation,” says Winkler. 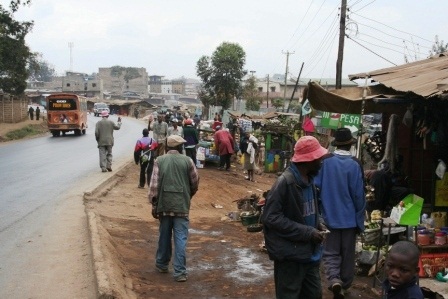 A matatus drives down the street in Nairobi's Mathare slum

Today her Health Education Africa Resource Team (HEART) is changing many lives like Jane’s by providing work, education and medical care to women with AIDS. Winkler is fighting social stigma and changing lives one person at a time.

“Our poverty at home in the U.S. does not compare with poverty here,” Winkler tells me on a recent visit to Kenya. “A small amount here goes a long way.” As I hand her the silver heart bracelet I brought as a hostess gift, I realize the $65 I spent could have supported a kid’s education for a year in her program.

Winkler, her staff and I climb into a green, safari-style land cruiser for a day’s work in Nairobi’s second-largest slum. As we drive into Mathare, men are burning trash and tires on the side of the road. Smoke stings our eyes but disguises the stench of human excrement. Heaps of garbage sacks stack three stories high. Human waste flows in an open sewage ditch. Litter carpets the earth. 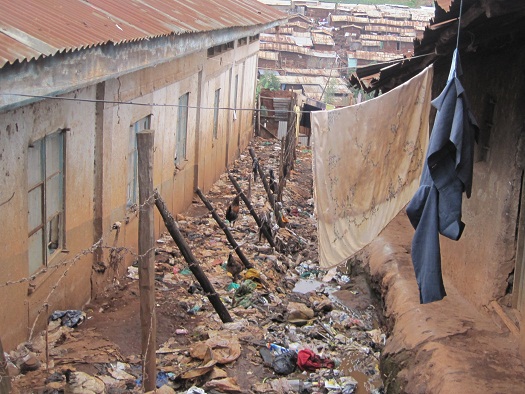 “The worst thing about working here is being hit with flying toilets,” says HEART social worker Mary Maithya. A flying toilet is a tongue-in-cheek term for the use of plastic bags for defecation. Users then throw the bags in ditches, along the road or simply as far away as possible, which can be difficult considering Mathare houses nearly half a million people in less than a few square kilometers.

Thousands are orphans cared for by grandparents, siblings sometimes as young as ten, or no one at all. School fees often deny children education since many families survive on less than ten cents a day. Without work, men stand around brewing moonshine and stare, eyes glazed over, as we pass.

Merchants are selling goods like furniture, fruit and clothing inside small huts and out front in the dirt. One has fish left out to bake with hordes of flies surrounding them. For many slum residents, a basic meal happens once every few days.

Small slum dwellings made from jagged pieces of rusty tin, garbage sacks and wooden poles line the road. Most living in these shanty shacks have no access to clean water, electricity, toilets or waste disposal. Winkler says her team often finds women lying near death on the dirt floors of shanties like these. 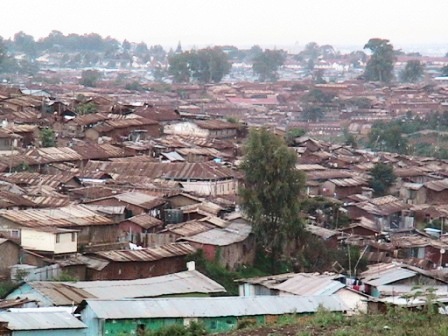 One of HEART’s many projects, the Women Equality Empowerment Project (WEEP) rescues women suffering from AIDS in the slums of Nairobi and Mombasa. “It has been a light in our lives,” says one woman now healthy and working in Winkler’s program. “Our minds were dead but now we are alive.”

WEEP strives to prevent children with HIV positive parents from becoming orphans. “We figure what better way to do that than to keep mom alive, healthy and working?” says Winkler. An estimated 33 million people are living with HIV/AIDS worldwide. More than 18 million have died, leaving some 13 million orphans. In Nairobi’s slums, an estimated 20 percent of the population carries the virus.

Slum residents also face widespread crime and violence due to an absence of law enforcement. Burglars broke into WEEP seamstress Lucy Mwihaki’s home on a recent Sunday morning while she was attending church with her three children. They stole her food, dishes and cooking equipment.

“My life has changed since I came to WEEP,” says Lucy. “My life was so bad before. Apart from being sick and my son being sick, I have no other worries.” After she was robbed, the WEEP women each gave her a portion of their monthly food rations and utensils from their homes.

Food and water shortages fuel violence. The Kenyan mafia controls the slums with beheadings, murdering of police officers and by burning down homes. After the disputed 2007 election, looters burned more than 100 Mathare homes. We pull up to one of the few buildings spared in the fires and get out.

Noise fills the busy street, and we hear sharp banging from men hammering metal nearby. A rancid stench I cannot quite identify hits us as we walk into the unfinished cement building. It is something like dirty human skin and unwashed hands and hair mixed with bug spray, body odor and human waste.

Eight joyful women rush down the stairs greeting us with handshakes, hugs and kisses. “Welcome, Mama Vickie, welcome,” they say. 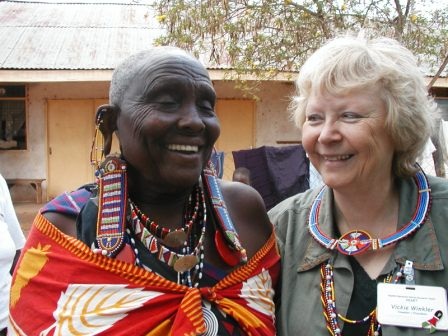 Winkler takes me upstairs to the Mathare WEEP center where some women are working. They sew in two shadowy rooms with old-fashioned foot pedal sewing machines. Noise from the street and men beating on metal fills the bleak rooms. 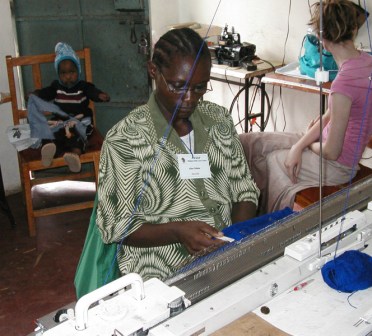 All of the women in the centers have been widowed or abandoned by their husbands. Maithya found Angeline Kaburg bedridden. She and her five children had not eaten in three days. Angeline told Maithya she had malaria. Angeline lied for months before describing how she had brought home a letter saying she had HIV. She slid the letter across the table to her husband. He read it, got up and walked out. Angeline never saw him again.

Women often remain silent when they find out they have HIV because of a lack of education and strong social stigma associated with the virus. Many places have communal bathrooms. Neighbors often deny women bathroom keys because they believe they can get AIDS from sharing facilities. Discrimination makes it difficult for these women to get jobs and provide for their families.

Kaburg says before coming to the center she did not work or socialize because of the stigma. “I have now realized I can be one among the people in my community.” Angeline now trains seamstresses.

“We have helped our ladies go through the stigma until they have realized that they are human beings, just like any other person in the world,” says Maithya.

WEEP also provides medical care and antiretroviral drugs. “We teach them to break free of the stigma and get treatment,” says HEART teacher Tammy Francabandera. Jane and an increasing number of women now have undetectable HIV levels in their blood, proving treatments are working, and making it unlikely for them to transmit the virus.

University of Washington’s Dr. Michael Chung works with HIV patients in Kenya and teaches at the University of Nairobi. He says numbers on just how unlikely it is to transmit HIV with an undetectable level are hard to come by, but it probably means that transmission is reduced. Chung says condoms still provide the best protection.

Francabandera says women always ask how to get their husbands to use condoms when they sleep around. She says if a woman demanded one she’d be beaten. “They don’t think anything about beating a woman. I mean it’s pretty common. Usually because of the poverty, if she leaves there’s no place to go.”

WEEP seamstress Noreka Alusha says she feels healthier on antiretroviral medicine. “Before, I had to go into the streets and ask people for something to eat,” says the mother of four. “I had already given up, but when WEEP took me up I saw God.” 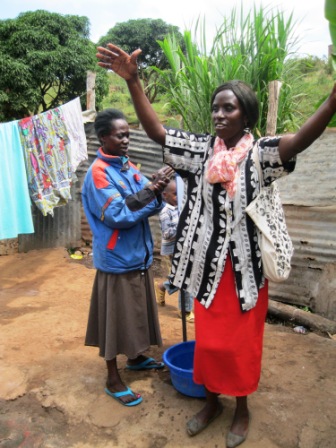 In addition to food, shelter and medicine, the women learn a trade and work in a center. An estimated 50 percent unemployment rate and social ignorance make it almost impossible for an infected woman to get a job otherwise. “It’s not easy for someone who does not have HIV to employ someone who’s positive,” says another seamstress. “I am so happy because I am HIV positive and I work.”

WEEP seamstresses make school uniforms for a HEART program that helps orphans stay in school by supplying a uniform and a goat. The goat’s milk provides nutrition so the orphan becomes an asset to the family. Together the five centers have produced more than 5,400 school uniforms. 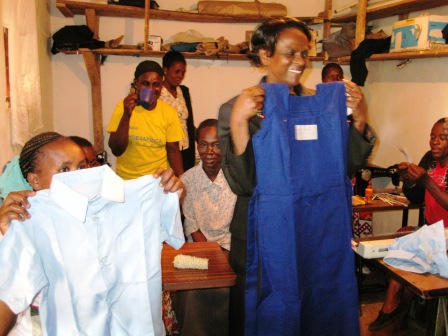 Some re-size underwear for another HEART project that has enabled 72,780 girls to stay in school by providing sanitary napkins, panties and education. Without a way of caring for their monthly cycles, many miss classes and eventually drop out.

“They’d use things like cow dung, old cloths or sometimes they’d just sit in the sand until they finished bleeding,” says Francabandera. Five dollars will buy a year’s supply of sanitary napkins and panties for one girl.

Others are training peer counselors to find those in need. “This project is to find heroes, women who are real heroes,” says Maithya. “Surely they can stand their ground, raise the children and tell others who have AIDS it is not the end of life. You can survive. You can embrace life in a different way.” 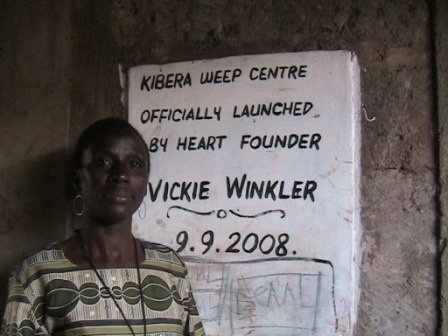 “Before I came into this project my family had already bought my coffin,” says Jane. “Today I own my own home, my children are in school, and my family has food every day.”

Jane now runs her own business that sells dried fish to Kenya’s largest grocery store chain. She chairs a women’s cooperative that is saving to buy a truck to transport fish 500 miles to market. She recently bought land to build a new home.

“We have seen stigma reduced here,” Jane says. “HEART needs money to take this project upcountry, where stigma is still high and many are dying from HIV.”

Before we depart, I watch the women sing and dance in celebration of Winkler’s visit. I realize that in front of me are 18 lives saved through the actions of one woman. More than 100 women have finished the project. Winkler plans to enroll 150 to 200 new women annually. 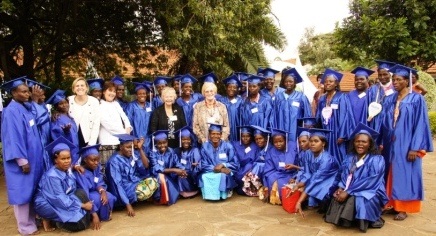 “Every life is precious. Even if it isn’t large, each effort is worthwhile,” says Dr. Chung. “One person and one step at a time can change the world.” Although millions live with AIDS, survive poverty and struggle with stigma, Winkler, Jane and each of these women prove it takes just one to make a difference.