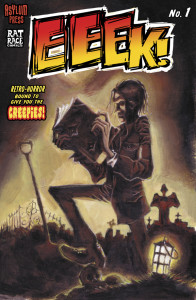 This retro-style anthology of all-new horror tales is guaranteed to give you the eeries and the creepies!  Taking a pinch of black humour from EC comics and mixing it with the art stylings of House of Mystery and Warren comics, EEEK! blends a heady broth that hits you like a burning incense stick to the retina. Jason Paulos delivers the goods with tales of revenge, zombies, vampires, ghouls and monsters.

Each tale drawn in a different style reminiscent of the B&W horror mags of the 70’s and 80’s. EEEK! #1 features four tales of terror.  In ‘Deadline of Death’ we witness rival comic artists dabbling with malevolent forces that arrive in the form of a chain smoking goatee wearing Satan. In ‘Lights! Camera! Murder!’ , A lovesick starlet and a ruthless film director embark on a doomed love affair that ends in pieces! ‘Stuffed’ is a heartwarming tale of domestic bliss and stuffed animals…NOT!,  in ‘Just Desserts‘ gluttonous food critic Sol Weinstein winds up stranded on a remote island with nothing to eat … save his fellow passengers.

“Jason Paulos is an amazing talent,” says publisher Frank Forte, “he writes and draws almost the entire book.  And he draws in different styles to make it look like there are different artists.  EEEK! will appeal to fans of classic horror comics of the 70’s and 80’s but also to a new generation of fans who like to laugh and gag.  We hope to reach a worldwide fanbse with the digital release.”

ABOUT ASYLUM PRESS:
Asylum Press is a publishing company that produces premium comic books and graphic novels within the horror, science fiction, and action genres. Asylum Press’ books feature original, character-driven stories and cinematic artwork by top creators and newly discovered talent that will appeal to not only comic book fans, but also mainstream fiction readers who don’t normally buy comics.  Asylum Press delivers high-concept books via a bold new business model that focuses on digital publishing and new distribution outlets in both the American and international markets.  Asylum Press is distributed by Diamond Comics Distributors, Liber Distributors and Tony Shenton and to the Booktrade by SCB Distributors, Ingram and Baker and Taylor.  Distributed in the U.K. by Turnaround Distribution.