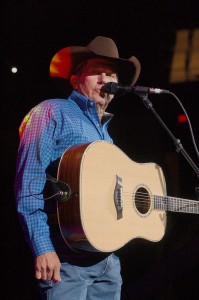 The “King of Country” is going back out on the road for one final run.  George Strait has announced the final installment of a nationwide tour dubbed “The Cowboy Rides Away”.  The tour will kick off in January and run through May. A press conference today in San Antonio revealed the final dates for legendary country singer and also confirmed the plans to tour in 2014 as the final round of  touring for the much beloved Country Star.   At 60-years-old, Strait  played 20 shows in 2013 and has now announced the dates for his 2014 final run. Members of the George Strait fan club will have the first opportunity to purchase tickets before the general public and their will most likely be another round of presales before tickets go onsale to the general public.  Dates for when you can buy tickets have not yet been released.  Strait will be using a host of various stars as opening acts and that list will vary from city to city.  Some of the opening acts announced so far include Jason Aldean, Sheryl Crow, Ronnie Dunn and others still to be named.