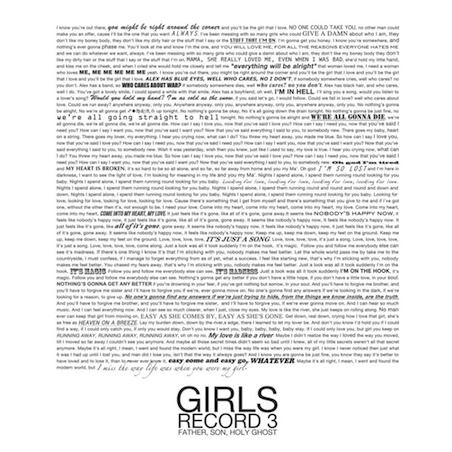 You can’t assume anything with pop-rock duo Girls. Keeping true to that statement, their third album Father, Son, Holy Ghost comes out of left field. For example, the album arrives with black and white print in a neat, lyric-ridden cover. No need for designer packaging to gloss up the band here.

The music is very well written; not in a complex way, but in a soulful, over-driven gospel style of its own. So can this be labeled as a gospel record by indie boys? Well, it’s not as simple as that, but kinda. They dabble in and out of some interesting heavy grooves and even insert some prog-rock mellow-tron float off moments.

It seems like Girls feel every word of their lyrics, which might be the most important thing about this album. They know how to translate words into meaning in a thoughtful way. Not getting caught up in 21st Century album budgets, Girls make great pop songs by adding elements of pop rock, surf guitar, and bombast rock drums together with songs immediately accessible and familiar. The album reaches out to the listener and asks some eternal romantic questions with the help from a few backup gospel singers.

The opener “Honey Bunny” bursts open with drums that sound like early John Bonham fills with minimal, surf-fused breakdown. Head writer Christopher Owens’ songs keep your ears open in many different directions through the melancholy “My Ma” to the hopeful “Forgiveness” with everything from over-driven guitar sweeps to the clean, jangling guitar swells that appeal to many. On the track “Magic” the mood sways to a doo-wop shuffle.

All in all, Father, Son, Holy Ghost should stand the test of time, which says a lot about this album. The music really draws you in. Look a little deeper into this album and you won’t be let down.

The Doors are back! New video by AVICII!
Copyright 2009 - 2012
Randomville.com ™
All Rights Reserved - Photos Licensed by PR Photos