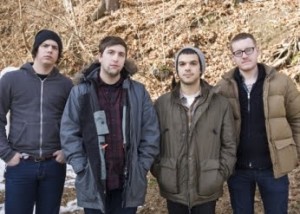 February 19, 2013 – Los Angeles, CA – Huntington Beach based No Sleep Records is proud to welcome indie rock foursome Sainthood Reps to the label’s burgeoning tight knit family of bands. The guys are currently on tour and are planning to release their sophomore album later this year.

“Ever since I saw Sainthood Reps play in late 2011 at the final Felix Culpa show I knew I wanted to work with these guys, and after a year+ of bugging them i succeeded in convincing them to join the family,” No Sleep president Chris Hansen recently told AltPress.com. “Could not be happier on working with the guys, and the upcoming Summer/Fall release.”

“Joining the No Sleep family was an easy decision for us,” Sainthood Reps’ vocalist/guitarist Francesco Montesanto added. “We already kind of felt like part of the family with Chris and many of his bands, so we couldn’t be anymore excited to release our next record with them.”

Sainthood Reps got their start in Long Island in 2009 with Montesanto on guitar/vocals, Derrick Sherman on guitar, Bradley Cordaro on drums and Jani Zubkovs on bass guitar. Influenced by bands like Sunny Day Real Estate, My Bloody Valentine, Mogwai and Built to Spill, Sainthood Reps blend an eclectic mix of indie rock, post-rock, post-hardcore and alternative rock, creating a unique style of brooding, atmospheric rock that grabs hold of listeners attention with each riff and verse.

The band’s refreshing sound, a split EP with O’Brother and tours/shows with bands like Caspian, The Felix Culpa and Glassjaw helped the band amass an underground following, which eventually led them to sign with Tooth & Nail Records in 2011, who released their debut full length, Monoculture, later that year.

Following the release of Monoculture, the band continued touring the U.S. with the likes of La Dispute, mewithoutyou and Brand New and released a video for the title track from the record, which leads us to now….Riding a wave of momentum, Sainthood Reps have joined forces with one of indie rock’s most prolific emerging labels with plans to write and record their best album to date.

Stay tuned to http://sainthoodreps.com/ for additional information and updates.