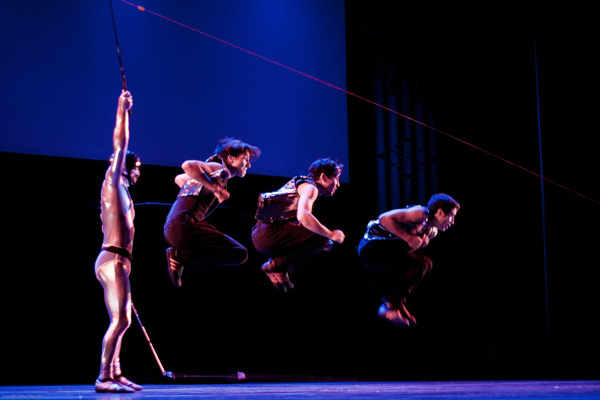 It’s impressive to watch people who have made what they love work for them. For NANDA, a group of four multitalented men in their twenties, it’s acrobaticalism. NANDA’s manager, Danny Milholland, sites acrobaticalism as “a very accessible word. Anybody can become an acrobaticalist. It’s doing what is inspiring to you and collaborating with other people.” Member Kiyota Sage finishes, “and not necessarily walking the roads of conventionality to do so.”

The group, all friends since childhood, made the word up in response to festivals wanting to bill them as jugglers, dancers, acrobats, martial artists, or stage fighters. “We didn’t want to be any of those. We had a lot of interests and wanted to be able to do anything,” says Sage. The group of four have supported themselves with freelance web development, graphic design and video production work while training in dance and related specialties since they formed NANDA seven years ago.

The Jacket marks the group’s first run in a major metropolitan city. It’s a seventy minute vaudeville, slapstick and martial arts inspired show. The narrative, choreography, score, sound effects, video, and animation was all created by NANDA members. “One of the biggest parts of NANDA, besides it being a very group project, is, indiviudally, we are all learning so much all the time. We are all learning and doing video production, design, 3D animations, web design, graphic design, business development, and art production. We’ve kinda unofficially been in school the past seven years learning all that,” says Sage.

Besides NANDA’s obvious individual talents, as a group, Sage says, “we are very interested in doing a lot which ends up meaning we’re doing it all. But this boiled down idea behind what we’re doing is that it’s a collaborative team effort and we have this vision of that extending out into the world – a global community of people all collaborating and doing what they’re interested in.” And it shows. Even if I hadn’t spoken with the guys before seeing the show, you can tell they are passionate people when they perform. I remember one moment when Tomoki Sage was standing on top of another member juggling and the biggest smile crept across his face; soon enough, the person across from him was smiling too.

Watching NANDA was like watching a movie that came to life.

A sequence would start on screen and finish on stage. Creative transitions showcased and sometimes foreshadowed subsequent routines like a car crash off stage that would fling props on stage that would later be juggled.

However, what was most successful about their performance was how naturally they continued to break the fourth wall by pretending to read the minds of audience members in the spotlight, nearly falling off the stage ledge, comedic dialogue that stated the obvious and, my favorite, the video spot during a costume change that was akin to the fake commercials on SNL. In every case, the integration of video created remarkable flow.

Seeing NANDA’s grace and precision, and being able to count the beats of an action sequence made me appreciate fight scenes more. As young boys, the members of NANDA used to play-fight. “The fighting thing [in NANDA] just kind of happened. It’s not something we were inventing since we were little. The choreography has slowly evolved into what it is,” says Tomoki Sage. The first fight scene they ever performed publically was at the movie theater before the second Matrix movie screened where both Tomoki and Kiyota conveniently worked.

Although fight routines may have been how the boys bonded, NANDA was more oriented around dancing, staff spinning, and juggling. Then they created a fist and sword fight. Two years after the formation of the group, the idea of The Jacket was born. Misha Fradin, who the group proclaims is the best juggler of the four, says when “we created this four person fight over an article of clothing people were like, ‘Whoa!…’ The idea was an article of clothing we could all switch around and easily take on or off.”

Sage comments that, “the nature of the comedic aspect of this show is that even though it’s all set to a really precise soundtrack and it’s very intricately choreographed as far as every second having to be performed to something else, it actually leaves an unbelievable amount of room for improvisation in that depending on the audience and how things are going and how we’re feeling, it’s a very different show.”

This is a show where it’s really important to laugh out loud. “Sometimes small houses can be the best audiences and they’re giving you tons of energy, but if you don’t have that energy exchange it can be really hard being on stage because you’re working so hard to keep it up and often times those are the worst shows.”

“But,” Tomoyoki Sage adds, “we’re actually not working as hard in that situation. We just have to keep the energy up where as if we have this ridiculously awesome, loud audience we’re often working a lot harder but we’ll be so much more into it, it’s just so much easier.”

It was a mesmirizing and nearly flawless seventy minutes that passed much too fast.

Kiyota Sage sums up the essence of NANDA in this: “[It’s a] kind of amazing thing that there’s so much potential in each individual and they can do anything. Then with the idea of collaboration, it gets even more crazy and cool. Just that excitement. Unlimited. Unlimited potential. Being an eight year old kid in your backyard for a living. That’s a key point in acrobaticalism. You have to learn to be the child.”

Tickets are still available for NANDA’s final five shows at the Broadway Performance Hall in Seattle, WA for Thursday the 20th through Sunday the 23rd. Find out more at the NANDA website.