Let’s start this out with me coming clean. Up until two weeks ago, I had never heard of Jason Webley. My girlfriend seemed quite surprised by this news and she insisted we listen to one of his cds right away. I liked it from the beginning. Webley’s music mixes; accordion, wine, Russia, piano, Vaudeville, sweet ballads, drums, more accordion, a carnival, folk and much more.

On Nov. 11th, I got a call from my girlfriend out of the blue. She had just discovered that Webley was playing a show that night at The Moore Theatre in Seattle and surprised me with two tickets. We later learned it was no surprise that he chose to play a show on 11/11/11 as he described the significance of the evening and his obsession with the number 11.

About an hour before the show, Amanda Palmer of The Dresden Dolls just happened to be playing ukulele outside of the venue to a gathered crowd as she stood on a street sign post. We only caught two songs of hers, one of which was the amusing “Ukulele Song.”

Inside the venue, people dressed in mixtures of goth and folk clothing blended. They fit in well with the folks who chose to dance to Webley’s music in the aisles. Since I didn’t know any songs or lyrics, I had a blank slate for a mind and no preconceptions of the music. I didn’t know if songs were being played better or different than times past. I had an open, judgment-free mind and I simply enjoyed what I heard.

For the song “With,” Webley asked to dim the house lights. He lit two candles which barely illuminated his image. The song became soft, quiet and beautiful as Webley sat alone on the piano. Eventually the rest of the band came out, each holding a candle. Finally about 30 others joined Webley on stage with candles. My girlfriend cried as they transformed the stage into an illuminated cathedral.

At 11:08 p.m. Webley told the story of how World War I had ended on this date. He said he found it disturbing that leaders let men die in combat knowing days earlier they would end the war on the 11th hour of the 11th day of the 11th month for sentimental purposes. Webley said that when the fighting stopped the silence must have been euphoric.

In tribute, he asked the entire crowd to remain silent. Then at 11:11 p.m. he wanted the crowd to count each second leading up to 11:11:11. No one made a single sound for one minute. The word astonishing came to mind, nothing else. The crowd counted and at the 11th second everyone went bonkers. The music started back up and a gigantic number 11 lowered down from the ceiling. People dressed in cardboard number “1” outfits joined the many dancers on stage. It felt like New Year’s Eve! 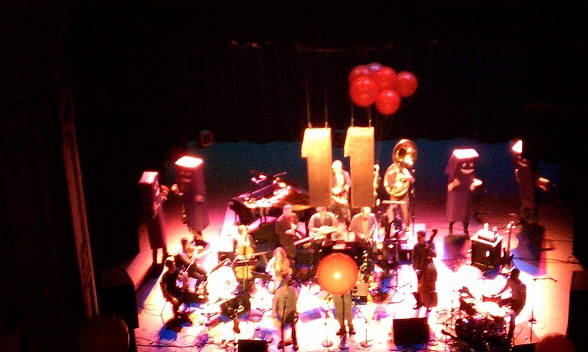 Feathers fell on top of a now shirtless Webley as he sang “Music That Puts Everything Together.” The crowd softly sang the chorus “Ya da dee, da da da. Yah, da, yah da dah,” along with him. He invited anyone to join him for a walk after the show. As the now full-on orchestra band played on, Webley put his shirt and jacket on. He went to the back of the stage, grabbed a string of six large red helium balloons and began to walk through the crowd. It seemed like the show had ended.

When we got outside of the theatre, the crowd crossed the street and headed south on Virgina street. Were they still following Webley by chance? We couldn’t see him or the balloons at first. We decided to follow along as did almost the entire crowd, just in case.

Down side streets we went, nearing Pike Place Market and hanging a right. Eventually we could see those red balloons with hundreds of people following them. Everyone seemed clueless as to where we would end up, yet no one seemed to care. “Ya da dee, da da da. Yah, da, yah da dah,” we continued.

A parking lot attendant stood on the sidewalk with a dumbfounded look on his face. “Did you see a man with large red balloons walk by here?” I asked. “Yes,” he replied. “He went that way,” he said pointing down the street. 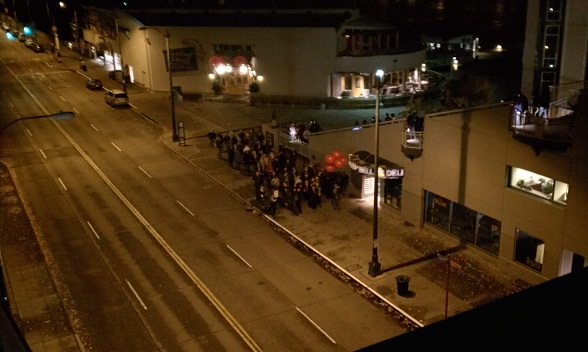 We made our way to Olympic Sculpture Park. The nearly full moon lit the walkway for the crowd, almost on purpose it seemed. We knew we were in for something unique. Surely Webley wouldn’t just stop somewhere and say “thanks” and call it a night. Or would he? The confusion continued.

Eventually the nearly mile and a half walk ended on a rocky shore of Puget Sound where some tiki torches were lit. The crowd slowly gathered. Webley never said a word as he danced to the chanting crowd, balloons still in hand. He had a priceless look of joy and gratitude on his face. He knew he had created something special, a moment.

Webley took off his hat and tied it to the strings connected to the large balloons. He danced around some more, pretending to release the balloons a few times. “Ya da dee, da da da. Yah, da, yah da dah,” the crowd continued to softly sing. Finally he opened his hand and the balloons set off for space, along with his hat. The crowd cheered and clapped as the balloons stayed visible for quite some time.

A decent sized boat sat in the cold water about 100 yards from shore. Webley looked to the boat and turned back to the crowd. He began to take his shirt off and instantly it became apparent what his show-ending move would consist of. Nearing midnight, the chilly air registered around 38 degrees. Sure enough, Webley began to take off his shoes, socks and pants. Standing in only his boxer briefs, Webley waved a grateful goodbye to the crowd and stepped into the frigid water. There was no turning back now. Webley began to swim towards the boat. “Ya da dee, da da da. Yah, da, yah da dah,”

After a few moments, Webley crawled onto the boat and the crowd roared in satisfaction. Many people yelled “thank you!” and “we love you!” The sails of the boat erected and a half naked Webley walked to the front and gave a long wave goodbye.

A gigantic moment of fellowship occurred as we turned to face the stunned crowd behind us. For a brief moment, everything in the world seemed okay. Penn State scandals, Occupy Wall Street, elections, Afghanistan, poverty and all of the other problems in the world disappeared from the mind. 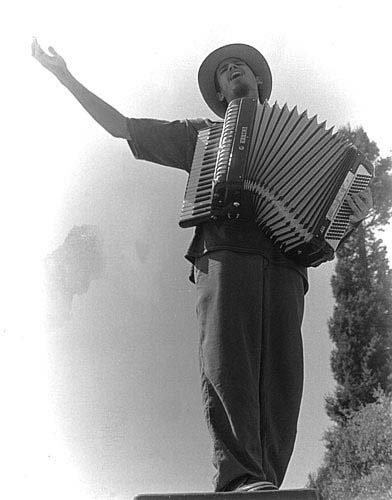