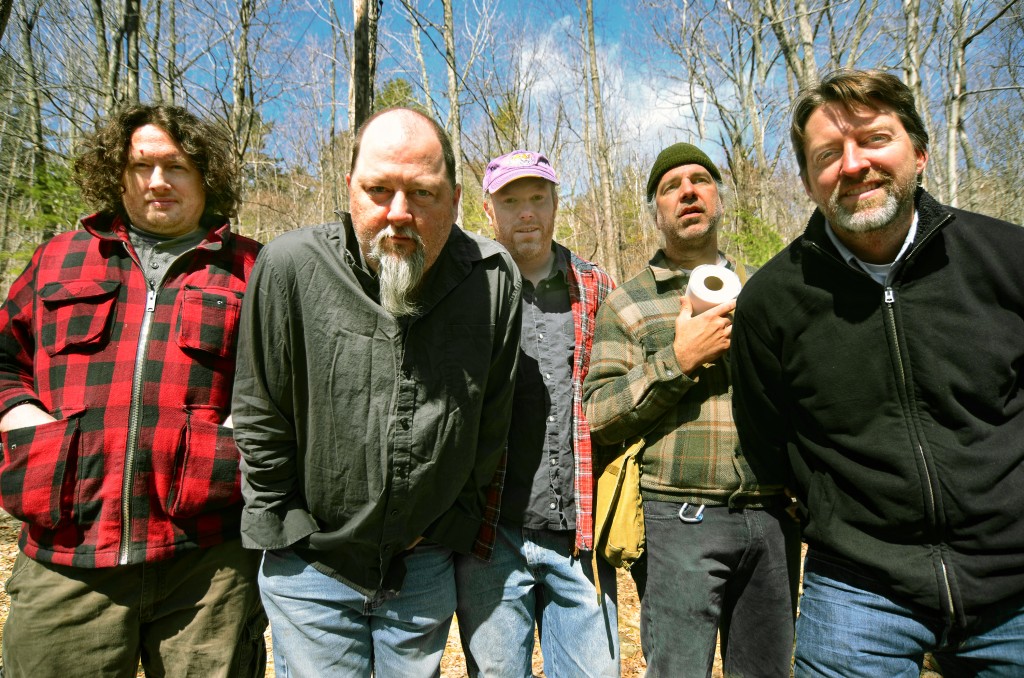 The Gourds  stormed into Seattle for another rollicking, foot-stomping performance.   They are on a grueling country-wide tour promoting  their new album, Old Mad Joy, produced by Larry Campbell for Vanguard Records.

Tony Fulgham’s Jackrabbit opened the show.  Once again, the band performed an excellent set of country rock and got the crowd moving.  Click Here for a recent review of their show! 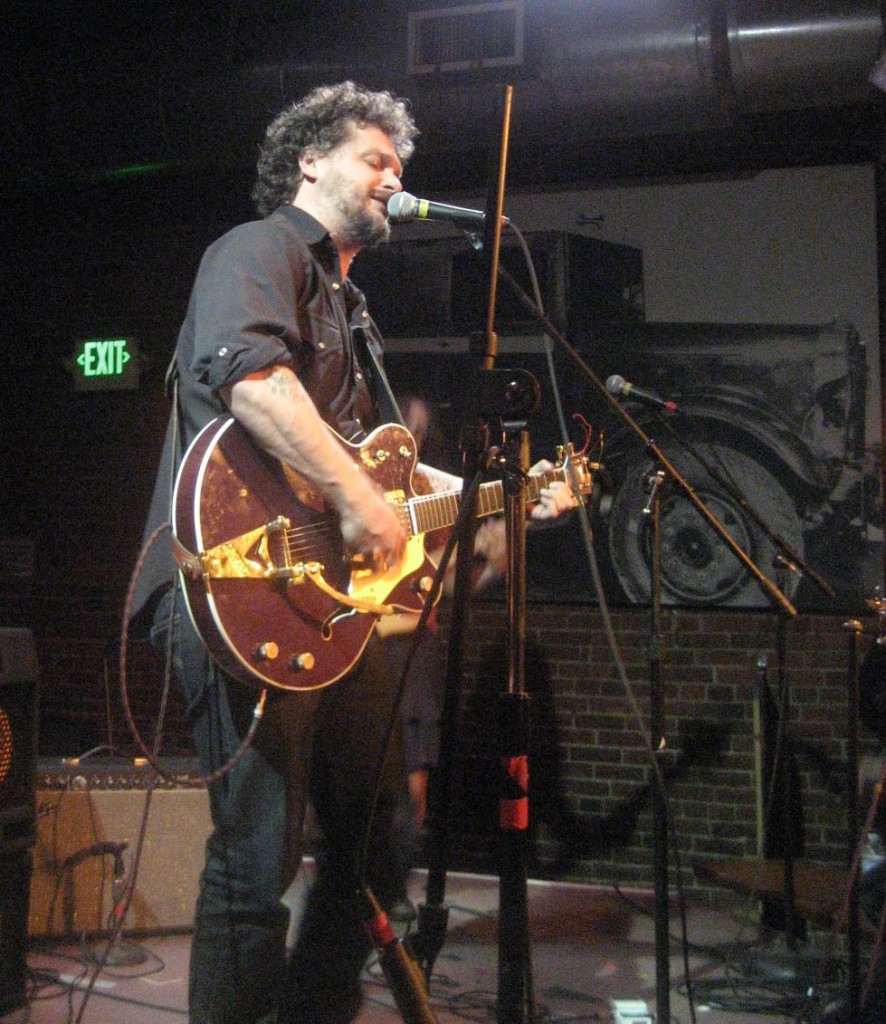 The Gourds’ show at The Tractor Tavern featured most songs from Old Mad Joy.  It felt more like a rock show than a revival this time around.  Their new music has a 60s psychedelic vibe, heavy on electric guitar, with psychotropic solos from Kevin Russell.  I could hear The Rolling Stones bleed through some of their songs; especially those from co-singer/writer Jimmy Smith, whose voice sounds similar to Keith Richards’. 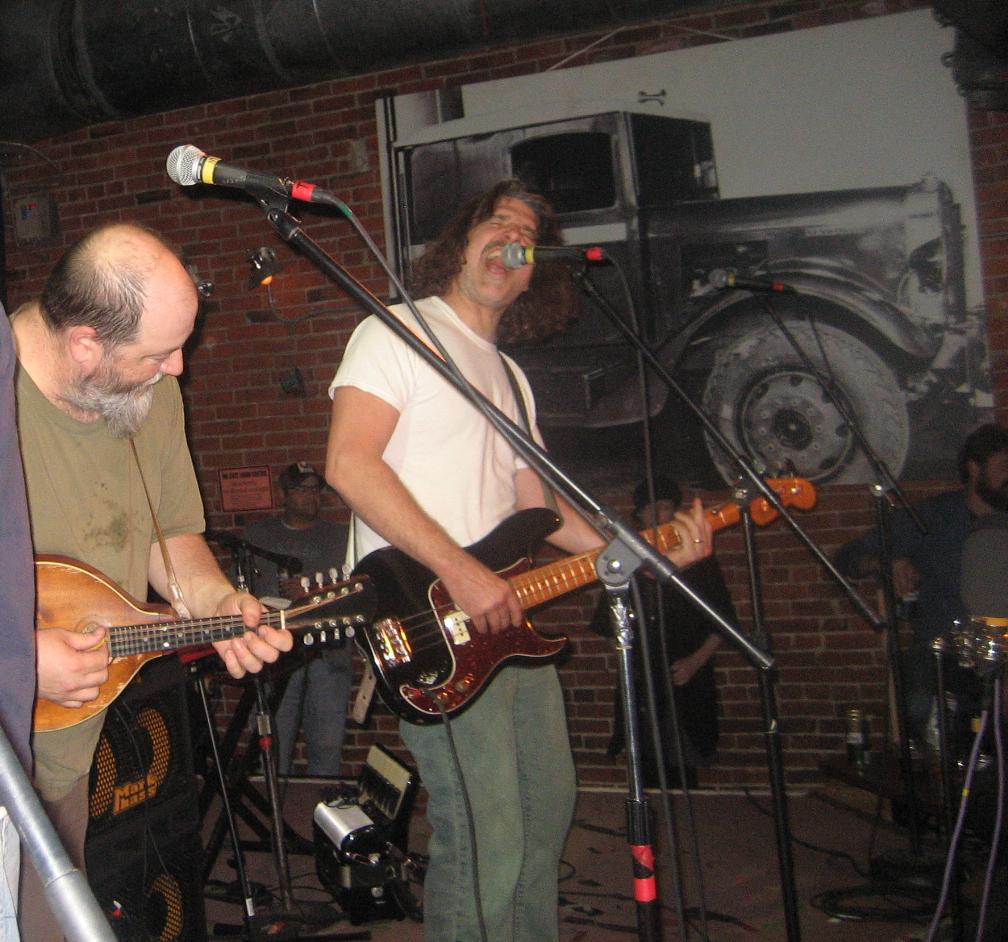 Jimmy Smith on Bass With Kevin Russell on Mandolin

The Gourds formed 17 years ago in Austin, TX.    They have 11 albums under their belts, and travel the countryside spreading the joy of live music.  They make appearances at SXSW, Bumbershoot, Hardly Strictly Bluegrass, and other festivals.  Their motto: “For the Unwashed and Well-Read.”

The Gourds’ original music, written mostly by Russell and Smith, is sometimes complex and so eclectic; it is impossible to categorize their music.  Their songs range from Tex-Mex country rock to Bluegrass to Cajun to something out of a church hymnal.  This latest album has more of a rock influence, although rock riffs and beats are scattered throughout their older music. 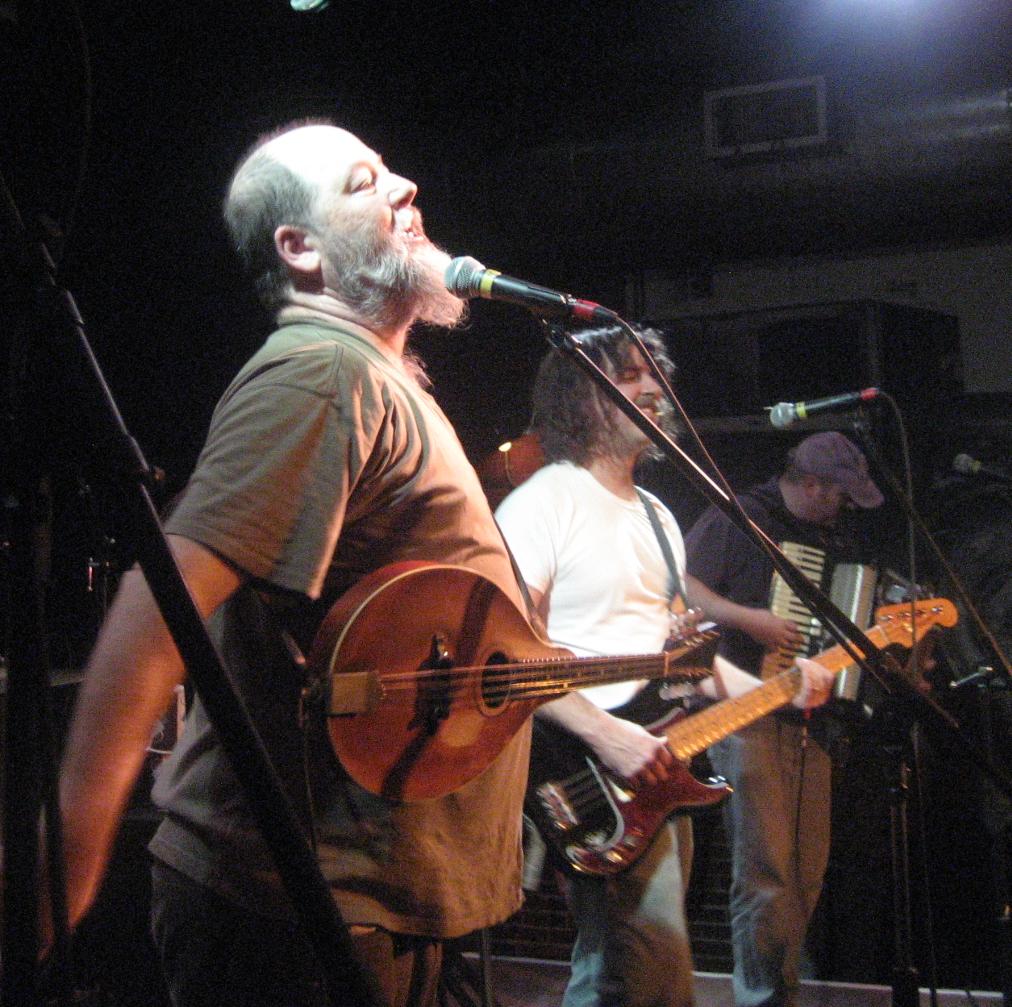 They are a full body-mind-and-spirit show.  Each band member brings energy and puts their heart into each performance.  Kevin Russell, co- singer/writer, plays electric and acoustic guitars, harmonica and mandolin.  When he gets into the music, he stomps to the beat, gyrates, postures, poses, and throws his head around like a man possessed–or blessed. 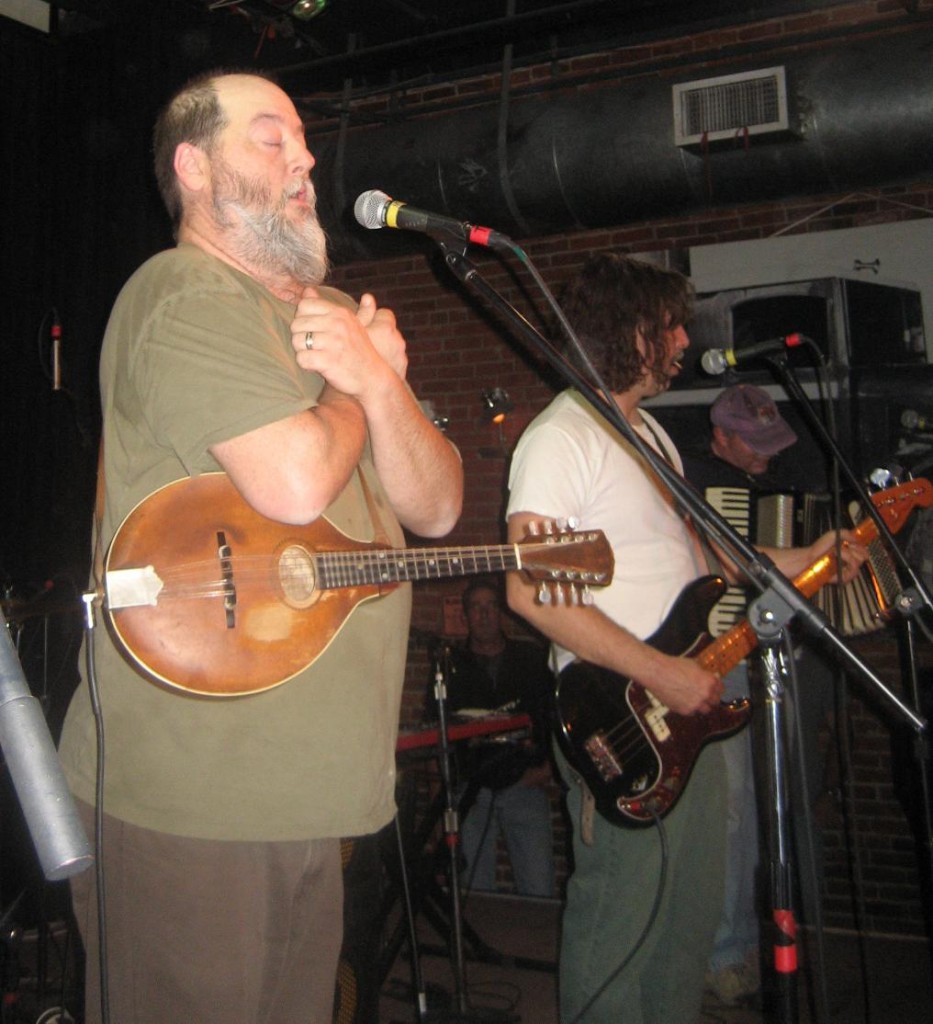 The Gourds’ musical energy and rampant joy spills out over the low stage and floods the audience.  They stomp, wail, whoop, jam and generally cause musical hysteria.  When they’re in such a frenzied state, they are a sight to behold.  It is something that is hard to put into words.  The entranced (and possibly chemically altered) crowd responds accordingly, by whooping back, clapping and singing along, dancing and stomping in time. 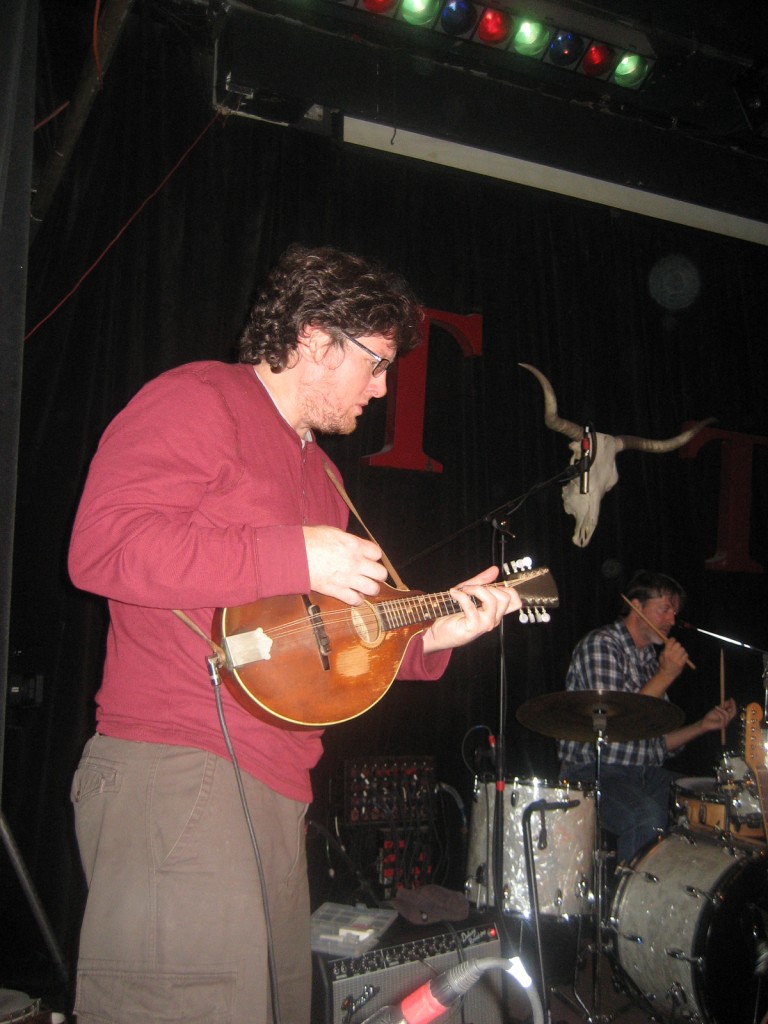 They also do a few covers, including T-Pain’s “Let Me Buy You a Drink,” and received some attention a few years ago after covering Snoop Dogg’s “Gin and Juice,” with Kevin on mean mandolin:

At times, their lyrics are perplexing and undecipherable; but it doesn’t seem to matter during their live shows.  They could speak in tongues and the crowd would still embrace each song.

An excerpt from “Marginalized” off Old Mad Joy by Jimmy Smith:

saw this magnanimous bottom feeder look up at me
thought pond scum sucked ‘til i had a bowl of rat soup inside of me
well, it’s pretty good said this cat named Sneezeguard
couldn’t ever crowd his pan always got a proper sear on
just to find out that easily led could actually steer one

Over the years, every set and  show has been unique in some way.  They bring new songs mixed with old, different instruments, and different variations to the songs.  Shinyribs (Kevin Russell’s alter ego on acoustic guitar) might show up and play the opener with a mix of original and covers of old gospel and blues tunes.  The crowd ranges from all walks of life, from cowboys to college students.  The one time I didn’t bring my camera, a girl next to me kept her V-neck T-shirt pulled down pretty much the whole evening and flashed her recently purchased boobs to the smiling band (and others’ cameras).  Not to be outdone, a tall, skinny guy in a yellow T-shirt approached the front of the stage and pulled his shirt all the way up and rubbed his belly and chest, to the roar of the crowd.  That was the same night Jimmy’s bass got knocked over, smashed into the side of a beautiful acoustic guitar and made a big hole in it.

A camera crew filmed the show during their most recent visit.  I asked Max Johnston who they were, and he said he didn’t know; they’ve just been following the band around like a couple of stalkers!  I suspect, with their new Vanguard label, we will see a DVD shortly. 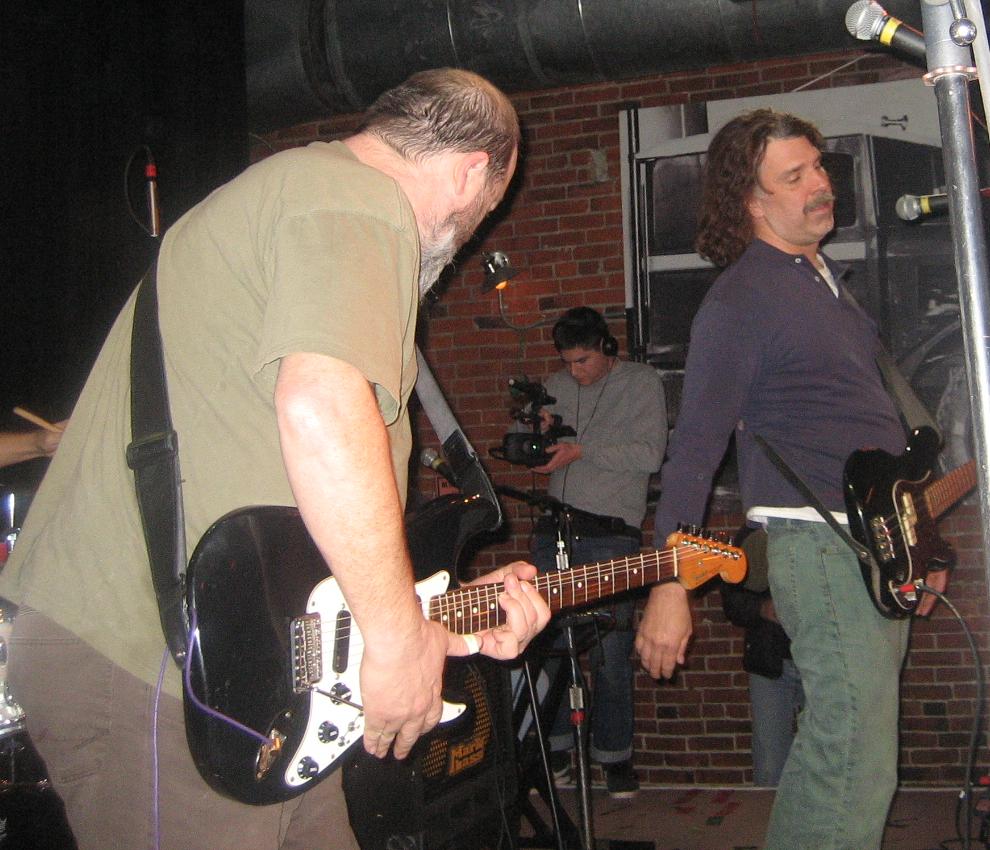 On this chilly October night, we put our political differences aside and followed Jimmy’s plea to “Occupy The Gourds!”  The Tractor crowd warmly embraced their new music.  The older songs, worked in throughout the set, galvanized the audience who sang and shouted all the words.  My favorite moment came during their three-song encore, where they played “Burn the Honeysuckle,” or Kevin’s “cowboy brag” song, as he calls it.

Here is a polished version of that song with an explanation of how he came about writing the lyrics:

Also, check out another encore song, “Mr. Betty,” by Jimmy, and hear the  Stones influence:

The long, frenzied night of soul-cleansing music came to an end, instruments and T-shirts intact.