I started my day off with Seattle’s Reignwolf. It might as well have ended with that too. On a hot and sunny day at Sasquatch comes this long, curly haired guy with a leather jacket, resembling Kirk Hammett from Metallica.

His name is Jordan Cook off the stage. He began the show by knocking a mic and stand down to the floor, much to the dismay of a stagehand who played cat and mouse with this until halfway through the show when the tech took the mic from Cook. “Welcome to Reignwolf” he said. 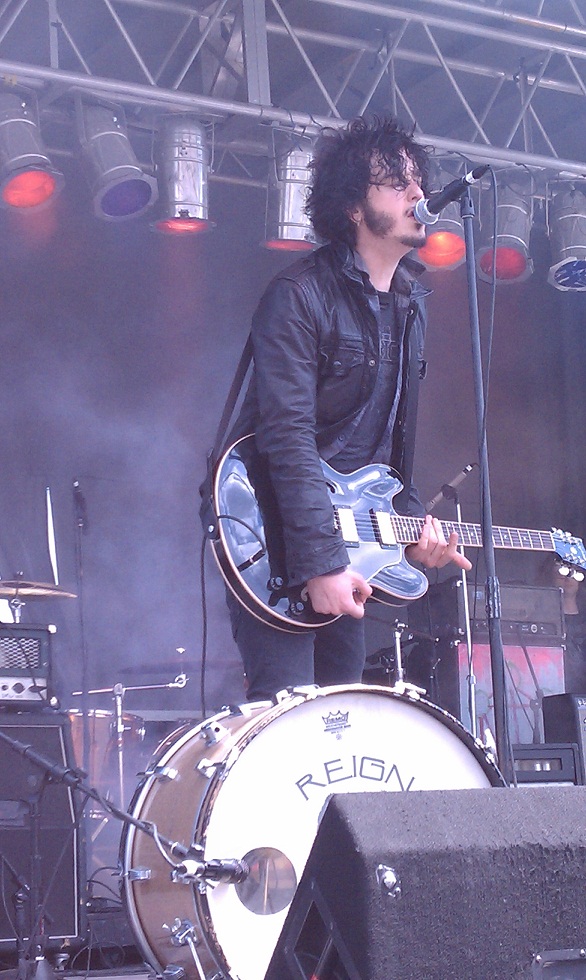 Cook sang, played electric guitar in an odd blues/metal kind of way, all while banging a kick drum with his foot simultaneously. Think Link Wray meets Flat Duo Jets meets Monotonix (to give it that hint of metal). YouTube those three names if you don’t know them. And then imagine them covering “The Chain” by Fleetwood Mac. Yeah, that happened. At another point he held the mic in his right hand, using that hand to strum the guitar so he could have quick access to bring it up to his mouth and scream. On his knees, all over the place.

And then his band joined him, giving that little bit of hardcore edge. “Tough” might be the better word. 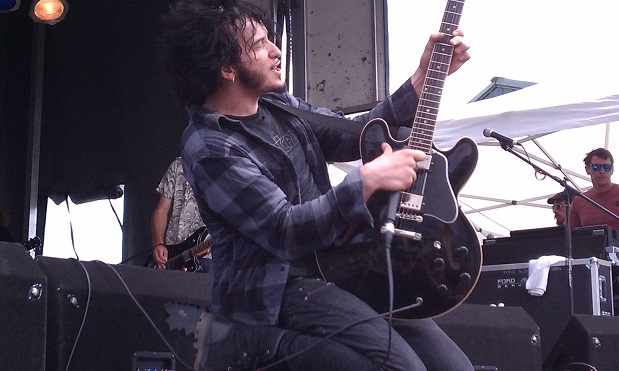 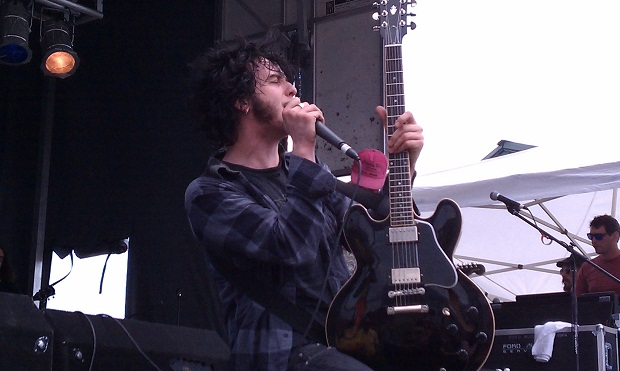 Cook was like a hyper kid on the stage. Just running around grabbing something new like a guitar slide or microphone, then throwing it down when he was done with it to grab what was next. He never stopped moving. Two monitors ended up flipped over and facing the audience due to Cook straddling them. The crowd ate it all up. 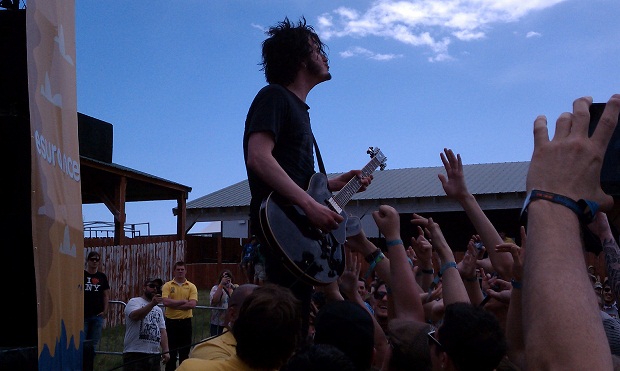 It was almost inevitable that he would end up down off the stage, playing as far into the crowd as he could get. And he did. Perched up on the railing, the security guard held him for safety, then Cook eventually made his way to the guard’s shoulders, rocking out, even briefly resting his guitar on the guard’s head. When he made it back to the stage he blew the guard a kiss, and that pretty much ended the show. 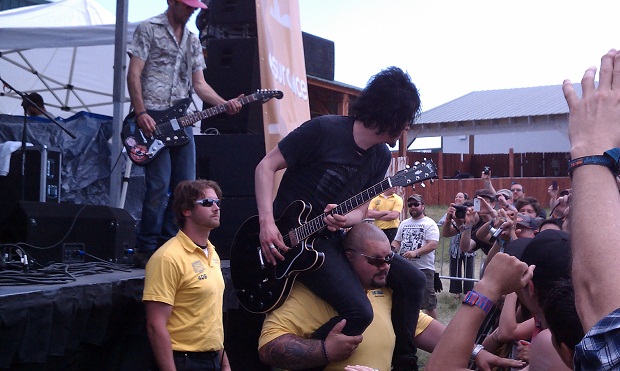 When Reignwolf started playing there were maybe 100 people watching. When they were done, there were well over 1,000 in the field and everywhere you looked, people were saying “HOLY SHIT!!” I was in the front row for the whole show and my adrenalin was on about 10,000 after the show. Since then, pictures have surfaced of Cook playing on the roof of the Easy Street Records hut last night in an impromptu performance. I have a feeling he’s not done this weekend.

I will now proclaim Reingwolf the best show I have seen all weekend. Even better than Jack White.

Yes, I said that.

Next up was Howlin Rain, who are good enough that Rick Rubin has worked with them. Oddly enough, they all kind of look like him too. Think of the band The Mountain blended with Black Sabbath. I liked them, but they really had a tough act to follow.

The best quote I’ve heard all weekend: “The best thing I heard last night was when that fucking dj stopped playing.” This was in reference to Feed Me, who was incredibly loud, even in the campground. Seriously, the bass made the ground shake all the way out there. There HAVE to be some def kids today. 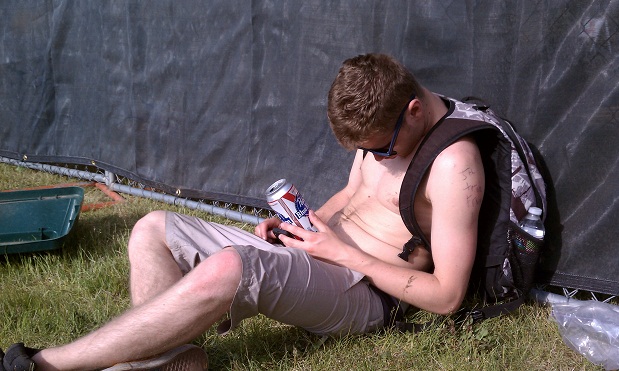 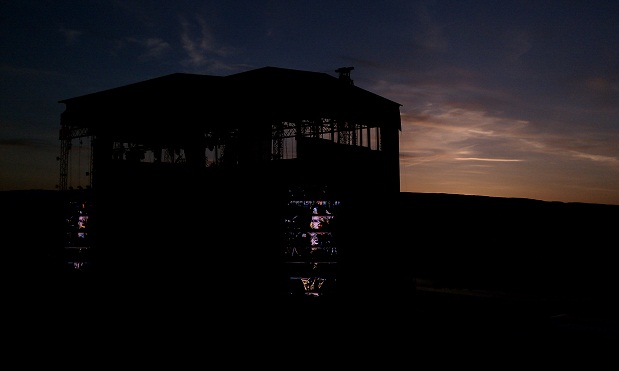 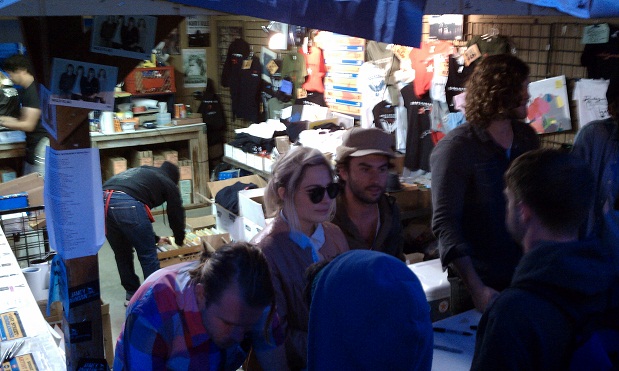 The Head and the Heart, signing autographs

Have to admit I heard nearly nothing I liked the rest of the day. The Head and the Heart were okay, but I saw them last year and nothing has really changed. The lone exception was M. Ward who orchestrated a huge boogie-woogie, honky tonk, dixie-land party. The smoky throat singer ended his set with “Rollover Bethoven,” which had asses shaking all up and down the hill. The weather was gorgeous at that point, with all-blue skies and warm sun, with a slight wind moving in to cool things off. It was great to just lounge around and watch kids have fun dancing.