Before bands like New Order and Pet Shop Boys conquered nightclub dance floors and the album charts with their detailed, layered compositions, there were bands in the late-70s and early-80s that were still testing the boundaries of electronica. Seeing that it was a new genre, many of these musicians treated keyboards, drum machines and vocal effects like scientists did with untested chemicals: mixing, matching, and re-layering the elements and hoping for the best result. Sometimes these trials would result with a nugget of gold, other times a disastrous explosion, but it is always fascinating to watching these experiments due to the testing of uncharted waters. 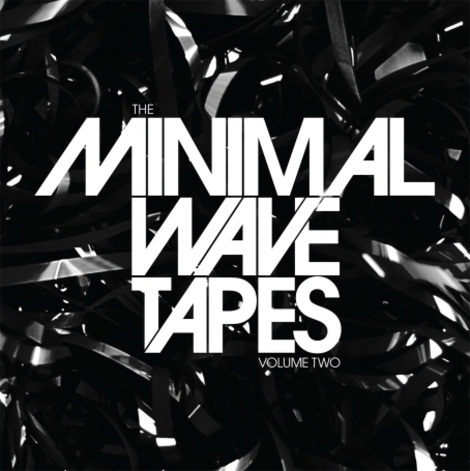 It is this mentality that dominates the Minimal Wave Tapes compilations. Now on its second volume, Tapes features remastered and reissued songs from fourteen of these so-called electronic amateurs from the 1980s. According to the website, many of the songs were “originally released on limited edition cassettes or vinyl by the artists themselves, and only a handful of people knew about them.” While bringing to mind the bygone era of cassette-trading culture, Tapes also recontextualizes these artists as unsung heroes of the genre, as musicians fueled by the experimental and punkish DIY-mentality that is all but unheard of in electronic artists today.

It would be erroneous to say that The Minimal Wave Tapes: Volume Two picks up right where Volume One left off. While containing the same number of musical artists and clocking in at a similar run time as its predecessor, the similarities mostly end there. The first volume had a higher technical focus on shoddy drum machines, whiny synthesizers, and off-key and off-tempo vocals, as well as a few verse-chorus-verse song structures that rivaled most of its mainstream 80s contemporaries like The Human League.

Volume Two has a larger musical scope, reaching out to different ends of the electronic genre. “From the screeching electric guitars in the electroclash opening of Hard Corps’ “dirty” to the Kraftwerk-aping soundeffects heard in Ende Shneafliet’s “Animals From Outer Space,” Volume Two boasts a more versatile track list than its predecessor. Also of note is the stronger focus on the musical effects of their instruments. From the lurking bassline of Antonym’s “Cinammon Air” to the blaring car horn heard intermittently on the techno-driven “H.S.T.A” by Das Ding (one of the two returning artists from the previous volume), most of the songs are more geared towards combining abstract sounds for the dance floor as opposed to the pop charts.

The most noticeable difference between the two volumes is the stronger presence of instrumentals on the latter. Whereas the previous volume featured the same, detached vocals on a majority of tracks, singers are rarely treated as the forefront on the second volume. While this certainly makes this compilation much less accessible than its predecessor, this again can be attributed to the stronger focus on arrangements. Most, but not all of the musicians on Volume Two instead treat vocals as another piece of equipment to use for their pieces, and utilize them as effects in the background, such as the vocal vs. synthesizer swapping routine as heard on Subject’s “What Happened to You?” or the faded vocal effect on Philippe Laurent’s “Distortion.”

The compilation also occasionally borders on redundancy. There are occasions such as Ohama’s “The Drum” when the arrangements simply don’t amount to anything and eventually collapse onto themselves, or moments in songs like “Japan Japan” when the chasms between the different effects are too jarring to be enjoyed. Oftentimes, the same pulsating pace of the album can be a bit tiring to handle, especially when you are not in the dancing mindset.

However, the fact that a majority of the songs on Minimal Wave Tapes: Volume Two were composed without the high-end sequencers that are now commonplace makes the compilation a fascinating listen. Lacking the pretention commonly associated with electronic music, many of these songs still carry the punch and bring the urge to get your feet moving when you give them a listen. Being that “Minimal Wave” is a newly christened genre, it makes one wonder what else there is to be discovered and released in the future.

Barsuk Records Band of the Month: Yellow Ostrich The Magnetic Fields: Love at the Bottom of the Sea
Copyright 2009 - 2012
Randomville.com ™
All Rights Reserved - Photos Licensed by PR Photos