THIRD MAN RECORDS BAND OF THE MONTH: THE KILLS

Each month, Randomville profiles an artist that Third Man Records provides us. For September, we’re profiling The Kills. 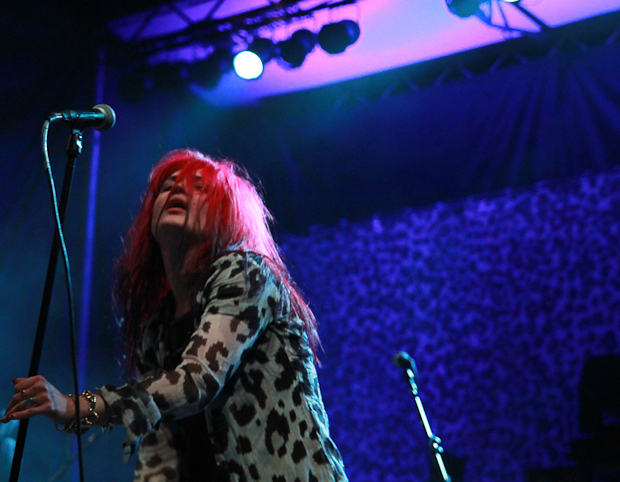 A leopard skin backdrop hanging up behind them. They were late getting to the stage. Each minute felt like 2o. Eventually, the woman, dressed in a matching long sleeve shirt, with fluorescent red hair, would end up perched on top of the speakers. Eventually, the man with the tough leather jacket, would create noises with his guitar like he was playing an intense game of Space Invaders. It was the song “No Wow.”

There was a good light show to accompany the computer beats and direct guitar of this lo-fi, indie rock, crunch-crunch duo that have been a band for over a decade now. Ultra-constructor Jamie Hince has so many effects that you would often never know he’s holding a guitar if you looked the other way. Often, singer Allison Mosshart circles and paces around on the stage like she’s about to rip someone’s face off.  She might. “It’s been a long time coming,” they sang during “Kissy, Kissy.” 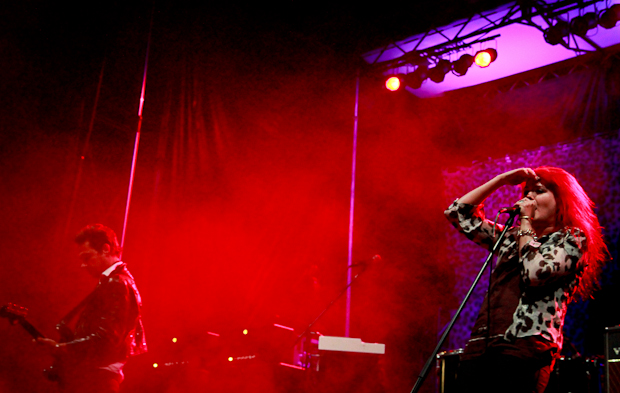 Closing out their stage on night two of Bumbershoot 2011 in Seattle, The Kills played to a large field of kids that were mesmerized from the sounds, and the combined smoke from smoke machines, and pot smoking lungs. It really is impressive to watch Hince work as there is always a back beat going on with what The Kills create in person, and even though buttons get pushed to make those sounds, you never really see a Mac laptop open anywhere. It just happens. It was also good to hear songs from the mix of not only their new album Blood Pressure, but also from No Wow and deeper. And when was the last time you heard a band cover “One Silver Dollar” by Marilyn Monroe?

The Kills put on an intense show, but when they played “The Last Goodbye,” it was the last spats of a peaceful rainfall hitting the pavement, which had followed up a massive hurricane. It’s a really pretty song, actually. This continued into “Pots and Pans,” only to swirl out of control again with “Fried My Little Brains.” The beat of the song has kind of a stomping mantra and it sounded like it could have fit in perfect as the background music for the fight scene at the junkyard in Superman III between Clark Kent and Evil Superman.

Then The Kills were finished. And we were left alone in a field.