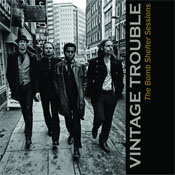 Check out the incredible performance HERE.

“It was a thrill to play with the guys last night,” says the Rock & Roll Hall of Famer who’s a real inspiration to the band, having played on most of the Stax catalogue and of course his work with The MG’s. “The only thing troubling about Vintage Trouble is how authentic they are so early in the game.”

Currently on tour with The Who, Vintage Trouble will spend most of 2013 on the road performing songs from their acclaimed debut album The Bomb Shelter Sessions. Beginning on March 1 in Pittsburgh, PA, the band will embark on a short headline run before SXSW and a performance at this year’s Coachella.

The New York Times raves, “If You Like Otis Redding Try Vintage Trouble … their music is R&B/ Soul on steroids. The range is wide, from slow and sultry to hot up-tempo dance tunes … like Otis Redding, Vintage Trouble makes music that is a little bit of everything … You can slow dance, groove, rock and let it all go.”

The Wall St. Journal simply says, “this band is going to be big.”

*with The Who
**with Band Of Skulls
***Headlining show